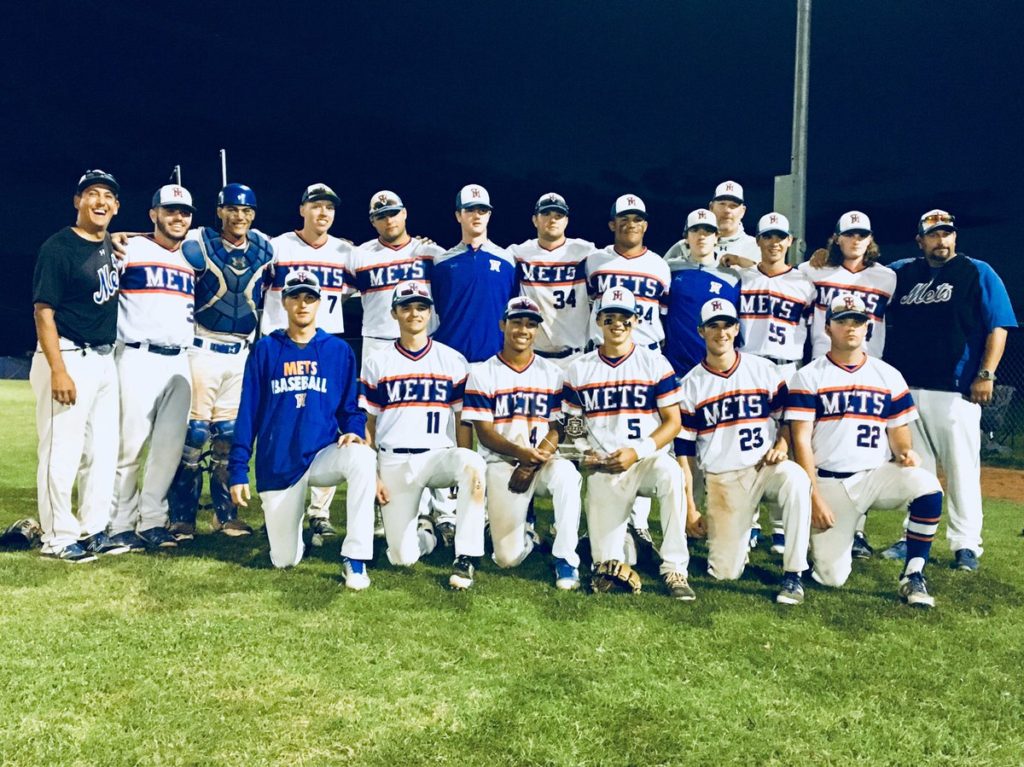 In the third season of the Canadian Premier Baseball League, the Toronto Mets organization captured its first championship when the 17U Orange squad took down the defending age-group champion Great Lake Canadians and secured the title on the second-to-last day of the season.

After finishing in the middle of the league leaderboard through the regular season, the Mets Orange squad fed off of its more recent success in tournaments in the United States and took the trophy home after big wins against its Blue counterpart and the GLC team.

“It was exciting,” Mets 17U manager Rich Leitch said. “It was the first one for our program, and then the 16U team won the next day, so it was a good weekend for us…We were confident going into the weekend and we had been on a pretty good roll. We had just come off of an 18-game winning streak down in the U.S. and we were playing really good baseball.

“We got through our Blue team, and they’re a scrappy bunch who have played us tough all year, and they play hard. Then we had to beat GLC twice in Dorchester, which we knew was going to be a tough task, but we were confident in the there guys we had going. Our three starting pitchers in the last weekend, Nick Manias, Curtis March and Jake Rogers – I believe they were a combined 27-1 on the season – so we had a lot of confidence in our starting pitching, and we had some guys who were really starting to swing the bats well.

“So we were confident, but we knew it was going to be a grind to get through it.”

Despite the grind, hoisting the CPBL trophy at the end of a successful season was fun for everyone involved.

“This was probably the most enjoyable year I ever had coaching,” Leitch said. “I can’t say enough about the kids. They essentially did everything we asked of them, from the first day of the fall last year until 10 o’clock on Saturday night [when the championship was won]. I was happy for them.

“Obviously the coach’s ego comes into play and I want to take credit for it, but 100 per cent of the credit goes to the players and the work they put in. They did a fantastic job and they’re all super kids. They’re a pleasure to be around and I couldn’t have been happier for them. The winning is one thing, but I was happiest for the kids. I was really proud of the way they responded.”

Not long after the Mets 17U Orange squad sealed the deal, the club’s 16U Orange squad secured a title of its own at the younger age group, bringing home a second trophy to the Out of the Park Sports clubhouse to cap off another successful season.

“The last couple of years, we’ve really tried to take a synergistic approach to our development plan,” Leitch said. “We’ve gone away from teams practicing separately and we’ll bring in all the kids for position-specific stuff. Our 16U guys are working with our 18U guys and they see how it gets done, and we’re fortunate to have some great players in the program to show them. We have guys like Daniel Carinci, Tyler Black, and an 18U guy like Denzel Clarke working with our 16U guys, and it shows them where they can go and where the hard work will lead them.

“It’s unfortunate that our 18U team had a couple injuries because I think that would have been an interesting development. But for us it shows, especially at the younger age groups, with the 16U and 17U teams we’re doing the right thing and developing these guys in the right manner.

“I’m really looking forward to next year because we’re going to have a strong group again. It’s unfortunate to see the season end each year but we are looking forward to getting it going again in the first week of September, and starting our fall season for next year.”