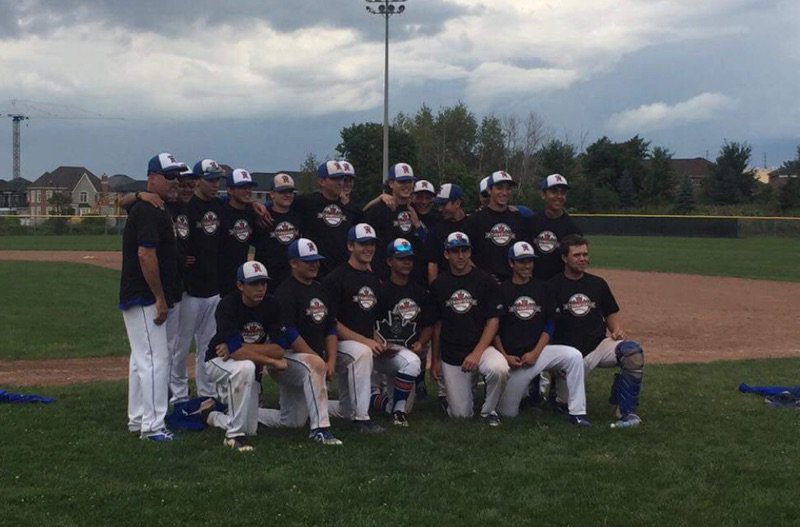 After going on an unbelievable regular-season run – including 20 straight victories – the Toronto Mets 16U Orange squad kept its success going into playoffs and came out on top as the champion of the 16U level of the Canadian Premier Baseball League.

The Orange team opened CPBL post-season play with a matchup against its Blue organizational counterpart. After a win to start the tournament, the squad suffered its second loss of the entire season to the same team that defeated it earlier in the summer, the Ontario Nationals. A win against the Great Lake Canadians sent Orange into the finals, but in the double-elimination formatted event, it had to win two straight games against the Nationals to take home the trophy.

“We started with our Blue team and they were up on us 5-2 in the fifth inning, and it didn’t look good,” Mets 16U Orange manager Darryl Reid said. “We looked like we were going to lose Game 1 and then we got a rhythm going and put together four or five hits in a row to win that game. Then we played the Nationals and they played really well…We couldn’t do anything. They caught everything, made all the plays, and they were really good that day.

“Then we finally got our [first] game against GLC. We didn’t want it to be in that spot but we had Drew Howard throw that game and he had nine strikeouts over five innings and was really good. He led us in that one. Then we were down 5-3 and came back in the next game against the Nationals, and had to beat them twice in the final…It was pretty exciting and pretty tense, and I didn’t think we were going to come back. It didn’t feel like that.

“But the guys, I don’t know if they thought they were going to win, but they were very calm. It was a different vibe that I hadn’t seen from them throughout the year. Looking at it now, it was probably the confidence that they could come back.”

The second-to-last game of the year was the one that really sparked the Mets and gave them some momentum heading into the championship final.

“The big game was the walkoff,”  Reid said. “Any time you walk off, it’s exciting, but they were really excited. This group, I don’t know if they’ll all play together next year and I think they all realized that and they wanted to win that championship. They were pretty excited. Listening to them talk about it afterward, that was one of their main goals.

“We had our last practice the Wednesday before, and we told them that in our minds, they had a successful season, and it was up to them what they wanted. So I didn’t have one single pre-game speech for them, and it was one of those weekends where we gave it to them and let them do what they wanted with it.”

Reid was especially excited about the way his team performed as an entire unit, giving him a chance to get everybody on the field and allowing each man on the roster to make a contribution in that final weekend of CPBL play.

“I kept saying to them that everybody would be involved and we were,” the Orange manager said. “We had five games and five completely different lineups, and we completely unloaded our bench in the final game with guys pinch running and pinch hitting. It sounds cliche, but literally everybody had an impact on the final, and it showed the flexibility that we had with them, and being able to move guys everywhere.

“It was kind of cool to say that it was a team game, and mean it, and then have it actually happen. It was a cool way to win it.”

The Mets manager was very proud to see his team work together and want to succeed and share in the successes of their teammates as well as accomplish their own goals along the way.

“In a new era of kids, where it can be a little bit individually driven for the success of where they are going to school or to what showcase and that stuff, this group – at least the way they act – they like each other and work together,” Reid said. “It was refreshing and as close to the old school team-first mentality as you can get now.

“These guys are kind of a hybrid, where they are all individually driven, which they should be, but they really wanted to win for each other, so that part was pretty cool.”