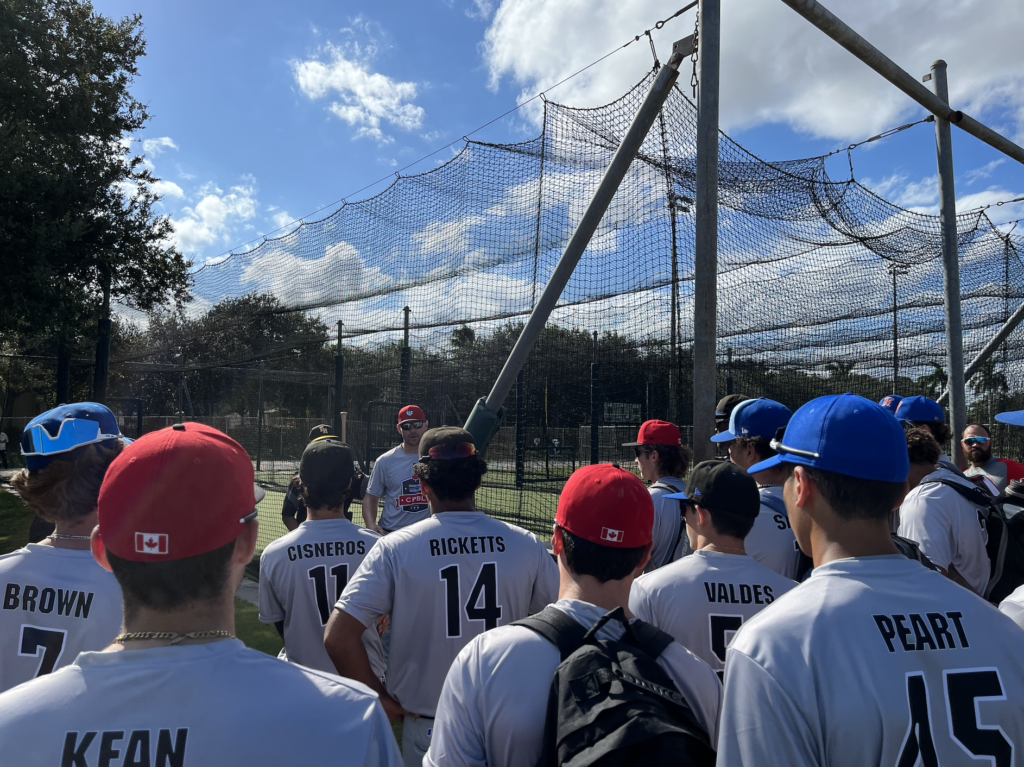 Last week, the top players in the CPBL headed south to Jupiter, Florida and performed well on one of the largest stages in the amateur baseball scene, the World Wood Bat Association.

General Manager of the Canadian Premier club, Jamie Romak, stated “the boys performed very well in Jupiter. Our pitching was particularly strong and I was impressed by their ability to trust their stuff in the strike zone against strong competition. Considering the environment, the moment didn’t seem too big for them as a whole so that speaks well of their confidence.”

“Offensively, I felt their presence was good in the box. As physically impressive as they are, I think the consistent level of aggression and energy impressed a lot of people following them. As a staff, we really wanted to set the tone for an expectation of winning and I expect we will have continued success for many years against the highest level competition.”

As noted, the strength of the club was on the mound, where against strong offensive competition, the pitching staff minimized damage. Overall, the Canadian Premier team went 3-1-2 while going 1-1-1 in pool play.

Following a practice Tuesday afternoon, the first game of the week in Jupiter was an exhibition contest on Wednesday between Canadian Premier and the Brewers Langley Blaze Scout Team. Nebraska commit Matt Evans had his fingerprints all over the victory, hitting a three-run home run while picking up a bunt base hit. Meanwhile, a combination of pitchers kept the opposing squad in check, contributing to the win.

2023 Nebraska commit OF Matt Evans with a 3-run 💣⬇️#CPBLPremier pic.twitter.com/1mUkFfXjku

Canadian Premier opened up pool play in a nightcap under the lights, packed with Major League scouts and college recruiters. It was a special atmosphere, and the game delivered. Tate Carey took the ball to start and sat 90-92 early on, throwing two strong innings. Matthew Brown followed and also worked in the 90-92 range, throwing three impressive frames. Zev Salsberg pitched well, closing out the last two innings. The bats were highlighted by Keegan O’Hearn, who doubled off the fence 349 feet away at 96 miles per hour, and Brayden Ricketts, who drove in the only run with a pinch-hit single.

Canadian Premier’s win in pool play came on Friday in a 9-2 game against 5 Star Performance. After getting off to an early lead, the big blow was a Ricketts bases-clearing double that opened up the scoring, and there was no looking back. Illinois State commit Matt Donnison started and worked in the upper 80’s, effectively mixing his pitches and attacking the strike zone. Illinois commit Parker Burgess followed, topping out at 91 while getting swings and misses on his overhand curveball before North Dakota State commit Matt Sargeant closed out the win with multiple clean frames.

Uncommitted 2024 C/1B Brayden Ricketts (@OntarioBlueJays) clears the bases with a double. A huge hit to make it a 5-0 ballgame.#CPBLPremier pic.twitter.com/Azgvl25OVZ

The final game of pool play was a classic pitcher’s duel. After a brief rain delay, Makaio Cisneros took the ball for Canadian Premier and was dominant through three innings of work, using his full repertoire to keep the opposing hitters quiet. The Cincinnati Reds Scout Team took an early 1-0 lead until Keaton Cottam came up huge with a game-tying single. Lachlan Harrison followed Cisneros and Jack Pineau threw the last two innings in a gutsy performance. Pineau competed in the strike zone, pitching out of trouble to keep the game knotted up before it ended in a 1-1 tie.

Canadian Premier concluded the week with a win and a tie on the final day. Noah Konings picked up his team-leading fifth and sixth hit on Sunday, while O’Hearn collected his third left-on-left base knock. Ricketts continued his strong offensive showing with a pair of hits in his own right.

Congratulations to the first ever Canadian Premier team to compete in the WWBA on a successful week in Jupiter.

Thanks to all the players, families and coaches, along with the scouts and college recruiters were a part of the week. #CPBLPremier pic.twitter.com/DXSHaqycIf

This year’s success serves as a strong stepping stone for the upcoming Canadian Premier team.

Romak noted, “as the off-season begins and the calendar turns, the CPBL will continue to create avenues for our players to get the exposure their talent warrants. The WWBA event is truly unique and I hope more and more players will be driven to be a part of future rosters.”