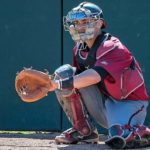 Heading into his first full season of professional baseball, Andrew Yerzy is excited to keep moving up the minor-league ladder and build on what he started last year.

After being selected by the Arizona Diamondbacks in the second round – 52nd overall – last year, and signing for $1,214,100, the 18-year-old former Toronto Mets and Canadian Junior National Team catcher united with the organization in the latter half of June and joined the Missoula Osprey in the advance-rookie class Pioneer League.

Yerzy spent 18 games with the Osprey before returning to the Arizona League, where he hit his first professional home run with the AZL Diamondbacks on August 17 against the Royals. He totalled 45 pro games last year after leaving the Canadian Premier Baseball League, adding five doubles and 16 RBI between both squads.

“My first year of pro ball was pretty good,” Yerzy said. “It wasn’t much different than a two-month long Junior National Team trip, to be honest. What we do with Team Canada and how Greg [Hamilton, Baseball Canada’s director of national teams] runs his camps is very comparable to what we do in the minors.”

Grateful for his time with the Mets and Team Canada, Yerzy credits the exposure to professional competition that he saw for three years with the Junior National Team as the biggest factor in helping him adjust to the next level, though he knows there is room for improvement as he continues to face high-calibre opponents consistently.

“The difference in professional baseball from the junior team was that you weren’t just seeing [power] arms for two weeks,” Yerzy said. “It’s every day now. On a trip with the junior team you only face pro guys for two weeks, and then it’s back to high school arms. And in pro ball, they are bringing out starters who are sitting 90 to 93 [mph] every day, and then having someone come out of the pen at 95-plus.”

Over just the last year, the 6-foot-3, 215-pound backstop has already seen his own game evolve, and is looking forward to more of the same as he heads out of extended spring training and into his upcoming season.

“Baseball is a game of adaptation, so I feel like your game has to constantly evolve, or else you’ll be stuck in the same spot you’re always in,” Yerzy said. “I feel like for me as a player, I get better every day with reps.”

“In terms of hitting, catching, and overall learning the game, I’ve gotten better, as well as my mental side has gotten a lot better. Back home, you can only do this for two weeks at a time, and you have a set time when you’re done. Out here, it’s every single day, so you can’t dwell on things that don’t go your way, or if you had a bad game.”

After spending much of his winter back at home in North York, and countless hours at Out of the Park Sports, the home of the Toronto Mets, Yerzy has enjoyed playing outdoors at the Diamondbacks facility in Arizona this spring, and is excited to get back out on the field for games as soon as possible.

“Spring training was a lot of fun,” Yerzy said. “There were a lot of bodies just kind of flying around, but for the most part it’s pretty laid back and it was good to get outside and move away from indoor baseball…My goal for this season is to make it to a full-season team by the end of the season.”

The photo accompanying this piece originated on the @ClubhouseCorner Twitter page. 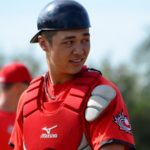 The 17-year-old catcher for the Toronto Mets could hardly believe that his tour with the Canadian Junior National Team was coming to an end before his final trip to the Dominican Republic in May, and now, after the first day of Major League Baseball’s first-year player draft, the whirlwind has just begun.

Selected by the Arizona Diamondbacks in the second round on Thursday night, 52nd overall, Yerzy is likely to make a decision on his future before the weekend. Committed to Notre Dame University, if the 6-foot-3, 200-pound backstop were going to forgo signing with the D’backs, he would be heading off to Indiana immediately, the school not requiring him to complete his final exams at York Mills Collegiate Institute before getting a jump on the upcoming school year.

“Right now I’m going to Notre Dame,” Yerzy said prior to the draft. “Hopefully if things go the way I’d like them to go, I’ll be in a pro uniform.”

Taken on the first night of the selection process – the second Canadian chosen after Stanford’s Cal Quantrill was taken eighth overall by the San Diego Padres – the only question left for Yerzy in determining whether or not things go according to plan is the amount of money on the table. If it matches what the young player has in mind, he could be at extended spring training in Arizona as soon as he graduates high school and obtains a work visa.

Watching his friends and former Team Canada teammates graduate the program ahead of him, make their choices, and venture off into the working world, Yerzy believes that he has an idea of what could potentially be in store for his future.

“It’s pretty cool,” he said. “I know [2015 first-round selections Josh] Naylor and [Mike] Soroka are the only guys in my three years who have gotten past rookie ball [both playing in the Class-A South Atlantic League] but it’s cool thinking that that could be me next year.

“And then you might have [15-year-old junior team member] Noah Naylor saying that he played with me three years ago and now I’m doing this. I think back to how much further they were ahead of me when I was in Grade 10, and now I’m in Grade 12 and they’re in Grade 10.”

While last year’s Canadian first-round picks have made early impressions on their respective organizations – Naylor with the Miami Marlins and Soroka with the Atlanta Braves – Yerzy understands that moving up the ranks of the professional realm can come at a much slower pace as well.

“It’s still pro baseball,” the catcher said. “And it’s only been two years since I’ve seen some of those guys, so they could easily be in the major leagues in two more years for all I know. It’s just a small sample size, and I’m ready to get after it, if the opportunity presents itself.”

Yerzy and Soroka have kept in touch since parting ways from the junior team, and though they hadn’t specifically spoken much before the draft about what might happen for the backstop, the right-hander had given his battery mate an idea of what he went through on the same night last year.

“I still talk to Soroka a lot,” Yerzy said. “We haven’t talked about draft day much but he said it’s awesome. You go into it and you want to have the right mindset. You go in thinking that you’re going to school and then if everything happens the way you want it to, then you might be pleasantly surprised with a two-million-dollar paycheque.”

Aging, maturing, and growing in multiple ways throughout his time with the national squad and his years with the Toronto Mets, Yerzy knows that he has come quite a distance in a relatively short time.

“It’s pretty crazy,” Yerzy said. “It’s been three years with Team Canada – a pretty short three years in my mind. I still remember my first at-bat of my first trip…I struck out on three pitches. I didn’t swing. Just thinking about it all, it’s happened really quickly. I’m thankful for all the opportunities they’ve given me, and the ability to represent my country 17 times.”

Not only has he gotten better and learned an immense amount, Yerzy believes that the game north of the border is improving all-around and will continue to do so with opportunities to showcase talent with the Junior National Team and the Canadian Premier Baseball League.

“Baseball in Canada’s definitely getting better,” he said. “No knocks on those guys but if you think back to my first year with Team Canada, we were getting blown out like 16-2 and averaging three hits a game.

“Now we’re winning games, tying games, playing multiple one-run losses. Even if we’re losing 4-3 to a bunch of pro guys and we’re 16 and 17-year-old kids, it shows that we’re heading in the right direction.”

Whether Yerzy decides to go pro out of high school with the Diamondbacks, or a start to a college education with the Fighting Irish next week, he’s learned what’s most important and is looking forward to what the future holds.

“The biggest thing I learned from Greg [Hamilton, Baseball Canada’s director of national teams] is to just have fun playing baseball really,” Yerzy said. “It’s going to be a job but you aren’t going to make it if you don’t have fun playing the game. You see a lot of guys burn out by Double-A just because they don’t enjoy doing it, so you have to have fun with the game.”