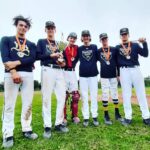 A new addition to the league, Watson Elite, out of Ottawa, enter the 2021 season as one of five expansion teams in the CPBL.

Founder of Watson Elite, Tanner Watson, started the program shortly after his playing days concluded and is excited about his organization’s latest step as new members of the CPBL.

“Entering our first season of CPBL play will be a great step for our program and players. Offering them consistent top competition in the province is a big piece of our development structure,” said Watson.

We are proud to be members of @CPBLeague ! Looking forward to representing Ottawa and growing the game! https://t.co/e4taP1ZtaT

In their first year as members of the league, the organization will feature two clubs, a 16u and 17u team. Watson’s expectations are straight to the point; “development and continued strong compete levels by each team throughout our winter, spring and summer schedules.”

“The 17U Program is a mixture of 17 and 16-year-olds. A strong, athletic core of players with some upside arms that we look forward to seeing as they continue to mature. We have a consistent core of players with a couple of additions that will add depth to our team,” said Watson.

“16U is half 15U and 16U age group players that have a very consistent approach and outcomes to games. A definite group of developing players that continue to progress to their potential. Looking for them to be competitive and consistent in their gameplay.”

In recent years, the organization’s players gained exposure to clubs in the CPBL, partaking in exhibition games. Watson looks forward to many more matchups against the best the province has to offer in 2021. “Over the past years, we have yearly played the Toronto Mets, Ontario Blue Jays, and Great Lake Canadians and look forward to meeting all the league affiliates with a common goal of offering the strongest competition possible,” he said.

During the course of the shortened 2020 season, Watson Elite had success playing against local older-aged clubs. They also competed in multiple series’ against the Blue Jays and Académie de baseball.

“Highlights were our ability to safely get in a full schedule in the shortened term. Since June 15th we were on the field 4+ times a week and got in tons of quality games and intersquad reps. Playing until October 15th with no off weeks was great for our players to progress and continue to grow and learn the game,” said Watson.

Team Red 2022 OF Ty Hamilton (@Watson_Baseball) with a diving catch in CF. pic.twitter.com/gTCnsCMs3p

Another highlight for the club was seeing Ty Hamilton, a left-on-left outfielder, participate in the CPBL All-Star Showcase. He represented the program well, making a pair of critical plays in the outfield while also picking up a big hit in Game 3. “Ty’s participation in the All-Star Showcase was a definite moment of pride for our program. Ty is an athletic two-way player who’s upside is on both sides of the ball. As a 2004, it was great to see him compete and do well versus his peer group and older-aged players as well,” said Watson.

Coming off of a positive 2020 campaign, Watson Elite looks to carry that momentum into their first taste of league play come May.