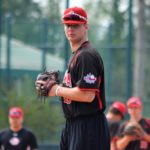 On Monday night, just 37 picks into Major League Baseball’s first-year player draft, Landon Leach became the first Canadian chosen in this year’s selection process, the Minnesota Twins taking the right-handed hurler with the first pick in the second round.

An alumnus of the Toronto Mets and Canadian Junior National Team programs, the 6-foot-4, 220-pound pitcher has come a long way since his days behind the dish. It was just a couple of years ago when the Mets opted to send him to the mound, believing in his arm and helping Leach make the transition that eventually led him to this point.

“I’d always been a catcher my whole career,” the 17-year-old said, before the draft. “So in my 16U year, I wasn’t sure at first about making the move. I was kind of iffy about it. Now that I’ve seen the results, I’m definitely happy that we’ve made the change…and I have a lot more sympathy for my catchers now. Even [earlier this year], I was trying to catch a guy in the bullpen, and he was just warming up and it was difficult. I can’t catch up to 80 [miles per hour] now. I wouldn’t be able to catch myself.”

This spring, playing for the Mets in the Canadian Premier Baseball League and for Team Canada – on two trips to Florida and one trip to the Dominican Republic to face professional competition – Leach was up to 96 with his fastball, also finding success with his slider and changeup, which he has been trying to implement more in game action.

“I do work on it a lot during the off-season, especially my changeup because I need to perfect that. I’m still working on it, but it’s coming along, so I’m happy about that…Honestly, last year I barely used my changeup. Maybe once an outing. I just didn’t really need to use it at first. Obviously back home I didn’t really need it, but [in Florida] I definitely do, playing against pro teams. But right now, on a scale of one to 10, it’s around a seven. Last year, it was a two probably. It’s come a long way.”

Since earning his way onto the Junior National Team roster, and facing professionals on a more regular basis, Leach has learned a lot about himself as a pitcher, evolving with both his failures and his successes.

“I’ve learned a lot about myself since I’ve been facing professional hitters,” Leach said. “It’s definitely difficult. My first trip with Team Canada last year in March was a big eye-opener for me, but I’ve definitely learned a lot coming on these trips and seeing the competition level. I feel like I’ve done a good job about it, but I have to continue to do that, and if everything works out hopefully I’m actually facing these guys on a professional team.”

During the off-season, Leach spent a lot of time hearing from a former teammate what the transition from the junior squad to the pro ranks is like. Andrew Yerzy, who was last year’s top CPBL pick in the draft – taken 52nd overall by the Arizona Diamondbacks in the second round, and eventually signing for $1,214,100 before starting his pro career – offered his experience to Leach as he headed into the end of his high school playing days.

“I’ve talked a lot with Andrew Yerzy, he’s one of my good buddies,” the Texas commit said. “I worked out with him in the off-season as well, and I talked to him about how pro ball is and what it’s been like for him. He told me everything about it and what he liked about it. He said it’s obviously a grind, but he’s enjoying it at the same time, because he loves to play…

“He said it’s a big transition obviously because our trips are [to play pros] for two weeks, and you’re over there for eight months, so it’s definitely a big change in time, but honestly I feel like I’m ready. I know I’m ready for that.”

In order to prepare for what Leach knew would be a big spring for him, the young hurler made some changes to his winter routine, and was happy with the results he gleaned while with Team Canada.

“Out of the Mets program, I joined the Pitching Performance Canada program,” Leach said. “I took two months off this year in the winter instead of one, just so I could rest my arm, because I knew this was going to be a big year for me.

“I started doing the weighted-ball program for around a month, and then from there it was mostly long toss and drill work to get my mechanics right. After that, I started bullpens around five weeks before my first trip with the Junior National Team in March…

Leach’s success in the spring with the national squad led to a quick rise in his stock and the 37th overall selection by the Twins in the draft. Though he still has a decision to make, the teenager feels ready for the future, with the support of his friends, teams, teammates, and family, no matter it might hold.

“The draft is exciting, but all spring I’ve been doing my best to go one trip at a time, not really thinking too much about the future,” Leach said. “I just wanted to do my best in every game that I pitched, and it’s definitely exciting.

“My whole family is excited about the future. It’s not a big family, but they’re all happy for me and they’re going to support me through anything. My parents have come on a few trips to see me, and my dad is usually hiding somewhere because he always gets really nervous, but they’re happy for me and everything I’ve done already.”