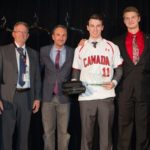 TORONTO – Adam Hall’s young career has had no shortage of highlights, racking up numerous accolades, travelling around the world to play on a variety of incredible stages, and playing under some of the best minds Canadian baseball has to offer.

In his four years with the Great Lake Canadians program, the 17-year-old has had the consistent guidance and tutelage of former major league players Adam Stern, Chris Robinson, and Jamie Romak, along with a number of others with years of pro experience.

Joining the Canadian Junior National Team at 15 years old, he’s been coached by national squad guru Greg Hamilton for a countless number of games, and among others has even had the privilege of gaining infield instruction from Hall of Fame second baseman Roberto Alomar, national team hero Pete Orr, and 2006 American League MVP Justin Morneau.

On Saturday night in Toronto, on hand to receive the Canadian Futures Award at Baseball Canada’s National Teams Awards Banquet and Fundraiser, Hall was one of those players, adding some even more memorable moments to his list.

“Watching guys play on TV and seeing them a lot and looking up to them, it’s pretty cool when you see them there, let alone when they come and talk to you,” the Bermuda-born native of London, Ont., said of the event. “Russ [Martin] came and talked to a bunch of the Junior National Team guys while we were standing around a couple times, so that was pretty cool seeing him.

Hall became the fourth winner of the Canadian Futures Award and first representative of the Great Lake Canadians program to win. The accolade was previously presented to Andrew Yerzy – selected in the second round by the Diamondbacks, 52nd overall, in the 2016 draft – Josh Naylor – taken in the first round, 12th overall, by the Marlins in 2015 – and Gareth Morgan – chosen by the Mariners in the second round, 74th overall, in 2014 – graduates of the Toronto Mets and Ontario Blue Jays programs now participating in the Canadian Premier Baseball League.

“It’s a big honour to get the award, especially looking at some of the guys who have gotten it before me,” Hall said. “It kind of says that you’re doing the right thing.”

Looking forward to continuing his successful run with Team Canada and Great Lake as he heads into the final five months before the draft, the Texas A & M Aggies commit is eager to get the season started. For the first time in his three years with both squads, their spring trips down south don’t overlap, offering Hall a chance to spend more time with his teammates, and out on the field.

“I’m pretty pumped to get back into things already,” he said. “The off-season felt like it’s been too long. It will be nice getting to go down to Florida with Great Lake, for only the second time actually. I got to go my first year and last year now with Great Lake, so it’s kind of a closing thing with them as well. It will be fun to be able to go and spend almost a full month in Florida and then keep things going for the draft.”

Heading into his final tour as a member of the Junior National Team, the middle infielder is hoping to leave as much of a mark on the program as it has left on him.

“I’m just continuing to play with Team Canada and contribute to that program as much as I can,” Hall said. “I want to try and give back for all they’ve given me so far. I’ve still got a couple trips left, and hopefully I’ll be there in Thunder Bay to go to another world championship [this September, after participating at the 18U Baseball World Cup in Nishinomiya, Japan in 2015], and this time in Canada. It would be pretty special to do that, and then to sum everything up, hopefully win it all there.”

Excited about what lies ahead, the year couldn’t have started better for Hall than the way it did Saturday night, honoured by the family he joined when he first suited up in the red-and-white jersey, one that along with his Great Lake family, he will cherish forever.

“When Paul Quantrill was up on stage [honoured as Baseball Canada’s ninth inductee on the Wall of Excellence], he summed up in his speech what I think Baseball Canada really is,” Hall said. “He was talking about how you don’t necessarily remember the games you play – I mean, obviously there will be certain games that you remember – but he talked about how you remember the people you played with, the people you met, how close you were with them, and just how the family comes together that is Baseball Canada. The experiences will last a lifetime and you’re a part of the family forever.” 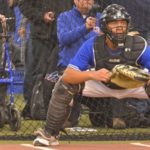 Noah Naylor has committed to the Aggies.

In between wrapping up his first full year of touring with the Canadian Junior National Team, and a whirlwind summer complete with his hectic Ontario Blue Jays schedule inside the Canadian Premier Baseball League and out, just before being named to the All-Tournament Team at the Perfect Game World Wood Bat Association World Championships in Jupiter, the 16-year-old catcher secured his spot in the SEC.

“I’ve had to bear down and make a decision, and I had it narrowed down to a couple schools and Texas A&M was in the top for a while,” Naylor said. “I was talking to them for a bit and once we were on our fall trip [with the OBJ program] we were able to make it down to Texas. We stayed there for five days, and during that time I went out [OBJ director of player development Sean] Travers to see the place, and I fell in love right when I saw it.”

With his final decision narrowed down to just three collegiate programs, the young left-handed hitting backstop enjoyed absolutely everything the Aggies had to offer, giving him a complete picture during his tour of the campus and facilities earlier this fall, standing out amongst the crowd when it came time for him to make a choice.

“It’s amazing,” Naylor said. “It’s a top-notch place. There aren’t really many places that are as good as that. They’ve got great gear, great equipment, great trainers, and it’s just the real deal. That’s something I like, I look forward to being a part of it…

“I met most of the coaching staff, I met the trainer, the video guy, I met some of the players on the team during the tour, I met the academic advisor, and all of them were just amazing people. When I was down there, we got to see the whole community. You can tell they’re all for Texas A&M and that’s something that I would love to be a part of, just being around those fans. They love the game and they really love that team.”

While in Texas, Naylor – currently Canada’s top high school prospect in the 2018 draft class – had an opportunity to get on Olsen Field at Blue Bell Park, see some of the current team in action, and tour all of the baseball facilities.

“They had some practice games when I was down there, intrasquad games,” the native of Mississauga said. “They just split the team into two teams and played, so I got to see a couple innings of that and it was great. It was pretty fun. I got to see some pretty live arms, and really good players.”

The 5-foot-11, 190-pound hitter’s commitment to Texas A&M followed an earlier commitment of his older brother Josh – selected 12th overall in the 2015 draft – to Texas Tech, both sharing their dad’s affinity for the state and everything it has to offer.

“My dad [Chris] is a really big Texas baseball fan,” Noah Naylor said. “He’s just always loved it. There’s something about it with him. And my dad, wherever he likes, my mom [Jenice] has some interest in it. And he just loves it, the environment, and especially the weather. He and I can both agree on that. It’s amazing.”

Just after securing his potential future spot with the Aggies, Noah rejoined Team Canada for its final trip of the year in Orlando, where he shared the news with teammate Adam Hall, the country’s top high school prospect for next year’s draft, also committed to Texas A&M, who reiterated everything the young catcher was thinking.

“I told Adam beforehand, just gave him a heads up, and he seemed pretty excited about it,” Naylor said. “It was definitely a good sign. I’m excited too.”