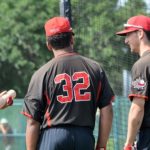 What happens if the draft doesn’t turn out the way you thought it might?

No surprise there. It happens to almost everyone.

Many excited players, disappointed draftees and unselected players, their families, coaches and friends all have one thing in common – the draft didn’t turn out exactly as they had planned it. Maybe they invested too much in the imprecise nature of rankings, or maybe school and money were bigger factors than everyone thought, but no matter the reason, nothing is as it would seem.

“Although the industry and many of the analytical teams have made tremendous strides to make the draft process more scientific and data-driven, it still remains an inexact science,” said Clint Longenecker, Cleveland Indians assistant director of amateur scouting and former Baseball America draft guru, ahead of the 2017 draft.

Of the many thousands of players seen each year by numerous scouts, cross checkers and other evaluators, only a small percentage earn the privilege of hearing their names throughout the selection process. And in all likelihood, most of them thought they would be higher up the list.

“The problem with the draft is that if you build it up and create a focus around it with the kids, by and large you’re setting them up for disappointment,” Baseball Canada’s director of national teams Greg Hamilton said, also ahead of the ’17 selection process. “Let’s face it, when you look back and track it, how many players out of the country are going to go high enough to where they’re going to be incredibly excited about the selection?

“You’re not getting too many kids who are…expecting the 40th round – they’re thinking way above and beyond that. It’s not easy to go in the top 10 rounds or 15 rounds or 20 rounds.”

Head coach of the Canadian Junior National Team, Hamilton often gets to work with the best of the best prospects from north of the border, including several of the Canadian Premier Baseball League’s top players. With many members of his squad eligible for each draft, he looks to offer a realistic outlook to his players each year.

“I try to temper expectations,” the Team Canada coach said. “I tell them that a lot of it is outside their control, [and] to enjoy their senior year, and go out and play because they love to play the game. Work on the things that they need to work on and if the draft comes, it’s meant to be. It’s all about timing…sometimes it’s meant to be out of high school and other times it’s not.”

With expectations abound and results remaining to be seen, many great players will be left off of the final draft list, perhaps overlooked by teams or maybe because they don’t fit the mould of what each organization has room for.

So how does it work, exactly?

“One of the longest-tenured and most respected scouting directors crystallized the variance in player preference when he said, ‘Nobody in the game is smarter than anybody else, we just see players at different times and have different risk tolerances,’” Longenecker said. “Seeing a player on the right – or wrong – day can lead to a wide range of opinions of that player within the industry.

“Some teams may have a player who goes in the third round valued in the eighth round because they didn’t see him on the right days. Not to mention if some teams prefer raw, toolsy and high-upside athletes who have star-level tools and potential, but a very small chance of achieving that ceiling, while others in the game might prefer lower-ceilings with higher probabilities.”

Those are just the factors under consideration when draft boards – and many ranked lists – are lined up purely based on talent. But, there’s more to it than that.

“The other complicating factor of signability enters the equation,” Longenecker said. “Many of the top high school players in the country will bypass their opportunities to go pro, sometimes turning down more than a million dollars, for the chance to go to school and play college baseball.

“A player’s makeup and medical history are just a couple of the other factors in the process that can create extreme heterogeneity within the draft process. Another is team-specific fits. Sometimes very talented players who fit in the top half of the first round for some teams will be much, much lower – or off some teams’ boards – because of arm actions or deliveries, etc.”

While Canadian players have occasionally had the reputation in the past of being easier to sign than their American counterparts, several have been sliding down draft boards in recent years for good reason. Young players from north of the border are continually getting better scholarship opportunities than previously, and on a larger scale.

“That’s what happened with a bunch of the Canadian kids,” one National League scout said of a previous year’s selection process. “When they’re drafted now, they’re more [comparable to] Americans than they used to be. In the past, you could draft a Canadian kid in almost any round and he would sign.

“What’s happening now is these scholarships are getting good and the money – because of slotting – isn’t that good after the fifth round for high school kids. There were a lot of good kids getting drafted later but they really aren’t going to sign because it’s not good business.

“That’s just because baseball in Canada has evolved a little bit, where now the kids have got good scholarships and because of the way slotting is, it’s hard. You can’t sign a kid for a hundred thousand anymore.”

In 2014, Ontario Blue Jays hurler Zach Pop was one of the country’s top-ranked hurlers heading into the draft. A strong commitment to Kentucky inflated his asking price from organizations, sliding him to the 23rd round of the draft – where he was selected by the Toronto Blue Jays – and the right-hander ended up joining the Wildcats and putting himself in an even better position for this year, following his junior season.

“Going in, I put a very hefty price tag on myself to deter me away from university,” Pop said. “I had a great university option at the University of Kentucky…and I knew that was a great scholarship opportunity. Not too many people get that, so I thought, hey why not take advantage of it, because the draft is going to be there in three years.”

The selection process for Canadians has certainly changed over the years. Canada’s first-ever first-rounder Chris Reitsma, currently a scout for the Baltimore Orioles, knows how different things are now, but is also excited for the opportunities young players are afforded.

“In the past Canadian kids have probably been easier to sign, just because the exposure and the experience haven’t been there as much as for someone playing in the States,” Reitsma said. “Now that’s not the case, obviously with our junior national team program and what we’ve put them through and the knowledge we try to instill in them.”

Another scout added: “Kids are getting better scholarships and it’s harder to turn them down unless they get a little bit more money. It’s changed over the last three or four years – the Canadian kids are getting more exposure than they used to and schools are starting to see that there are some good players here so the scholarships have gotten better.

With or without the draft, nothing should take away from what many young Canadians are doing on the diamond. While every Canuck selected should definitely bask in the excitement and prestige of being chosen by a major league team, success should most certainly not be measured by the number on MLB’s Draft Tracker.

“I try to make sure that the perception isn’t failure if it doesn’t end up being what they hope for out of high school,” Hamilton said. “The kids that we’re dealing with have accomplished a lot anyway. At the minimum, they’re out with the national team and for the most part, they have scholarships.

“That puts them in an enviable small percentage of players who play the game in this country and they should be proud of that. The draft is all bonus.”