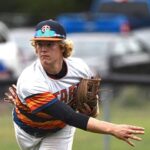 Sam White, an infielder/catcher for the Ontario Astros, was one of the better performers at the CPBL All-Star Showcase this past year and enters his junior season determined to take his game to the next level.

During the three-day All-Star Showcase in September, White swung the bat well against some of the province’s top arms. He went 3/10 with a hard-hit double, making loud contact all weekend long.

Reflecting back on his performance from the fall, White stated, “the All Star Showcase was awesome, it was great being out with the top players in the league and even in Canada. The event was organized very well. Overall I’m pretty happy with my showing at the tournament.” 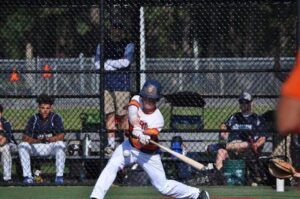 After self-admittingly struggling with his swing early in the year, things turned around after making slight mechanical adjustments to his swing later in the summer. “The pitching has made a big jump this year in velo and pitch mix, so an adjustment I made was making my swing shorter and simplifying it. I used to have a lot of hand and head movement, so I started my feet a little wider, got my foot down earlier to help with timing and pitch recognition. These were pitcher to pitcher adjustments,” he said.

Once the All-Star Showcase came around, these adjustments took full effect, and he was hitting on all cylinders as one of the toughest matchups for opposing pitchers.

Mentally, White noted that he had made significant strides in that department as well, altering his approach, which enabled his revamped swing to work the way it did.

“Ultimately my biggest adjustments this year came on the mental side, in the box and dugout. In the box I changed my approach, I was always looking for a fastball away, which helped me stay on all pitches and allowed me to let the ball travel, and recognize pitches out of the hand. In the dugout I was always trying to keep myself and the team positive, in the past I’d be quick to get down on myself,” he said. 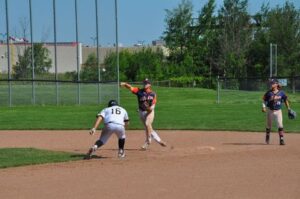 White, who describes himself as a “well rounded gamer, with a lot of confidence,” looks to complement his present abilities with advancements in other areas of the game. “A component of my game that I’m lacking is stealing bases. I hope to improve my speed in the basepaths and in the field a lot,” he said.

Going into the 2021 season, the high school junior’s goals revolve around winning.

“Some goals I have for next year are to win the CPBL championship and to make Team Ontario and play/win a national championship in the Canada Cup. Some expectations I have for myself in the upcoming year is to be a good leader and do everything I can to help my team win,” said White.

White’s bat has advanced well throughout his high school career, and in his biggest challenge yet, against the top arms in the province, he rose to the occasion and proved that he’s one of the premier hitters in Ontario in the class of 2022.