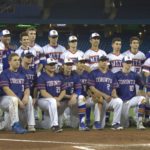 With the Canadian Premier BasebalL League season officially coming to an end, and the regular-season champions at each division being recognized, the circuit celebrates one of the best seasons it has seen, from the Toronto Mets 16U Orange squad.

The Mets finished the regular season with a 25-1 record, with a six-and-a-half-game lead over the next closest team in the division, and a streak of 20 straight victories to start the year, before suffering its only loss of the season.

“We’re pretty deep and everybody’s good, for lack of a better term,” Mets 16U Orange manager Darryl Reid said. “We have a couple guys who are higher-profile players, but everybody is solid.

“With our pitching, every guy goes out and they throw strikes, and they’re the same guy every time you see them. There are no weaknesses in the pitching staff. Everything works. I remember we were facing another team and they said, ‘Man, every guy who comes out here is good,’ so we are deep on the mound and that gave us a chance to win in every game.”

The team’s win streak was unprecedented at its level through the first three seasons of the league, and topped a leaderboard consisting of seven teams in the division. The Great Lake Canadians finished in the second spot, with the Ontario Nationals landing in third following the regular season.

“I didn’t expect that, because there’s nobody who really stands out above everyone else,” Reid said. “Typically with teams in the league, there are a bunch of really high-profile guys, but for us there were just a lot of really good players. I knew we’d be good and competitive, but I didn’t see this coming.

“We had some things that don’t normally happen, like Cole Iantomasi went off one weekend and hit 11 straight doubles, and we were down six runs in the fifth inning and came back and won by eight, so the stuff we were doing doesn’t normally happen. So I knew we had something special going on there, and that they were going to do well.”

Among the squad’s accomplishments, it was the consistency on the mound that most impressed the Mets staff, to go along with impressive success in the field.

“It was the pitching,” Reid said. “Every week, they threw well. Our defence was really solid too. We turned I don’t know how many double plays, but every time there was a double play to turn, we did it. All those plays that you kind of expect at the higher levels, we were making them pretty well.

“And we didn’t make any big errors that led to too many runs, so that was our key. I’ve coached at the 16U level before, and usually you don’t get the plays as automatic as we were doing it, and every play we got seemed to be in a big situation.”

Looking to carry the regular-season success into the post-season, the Mets’ manager believes his team just needs to keep doing more of what it has been doing throughout the year in order to make a solid playoff run.

“It’s going to come down to how much desire they have,” Reid said. “They’re learning how to win and they like it. We’ve had a lot of close games, and obviously I can’t speak for them but they haven’t played with the attitude that they just expect to show up – they honestly know they have to work to win, and they’re all very good.

“They work, they get it done, and they know it’s hard to win, so that’s the biggest thing. We just have to play and if we do that, we’ll do well. It will take somebody to outplay us to beat us, so if we do well, then we’ll have a good chance.”