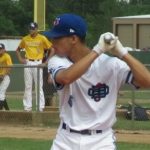 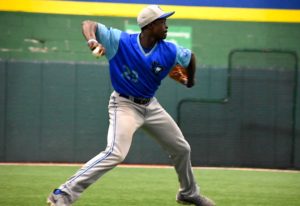 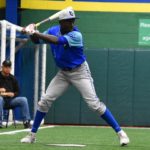 TORONTO – As the second day of Major League Baseball’s draft began on Tuesday, Dasan Brown quickly became the first Canadian taken off the board when the Toronto Blue Jays selected the speedy Ontario Blue Jays outfielder in the third round, with the 88th overall pick.

Consistently ranked atop the 2019 draft class as the selection process approached, Toronto had an inordinate amount of familiarity with Brown, a native of nearby Oakville. Not only had the Blue Jays seen him playing games in the Canadian Premier Baseball League with the OBJ program, and with the Canadian Junior National Team, but they also hosted him three times at their annual showcase for the best college-eligible players in the country, Tournament 12.

It was over those years that Brown showcased his propensity for growth, learning how to hone in on the tools that will help to carry him as he moves forward in his baseball career, as well as how to deal with the failures that baseball brings.

“When I first started playing with the Blue Jays, I just needed somewhere to play,” Brown said. “And [OBJ coaches] Sean Travers, Eddie Largy, Mike Steed, all those guys really took me in and helped me to understand it’s a game but you have to use your brain, you have to trust yourself, and trust your abilities. Once you can do that, the sky’s the limit.

“[Baseball Canada’s director of national teams] Greg Hamilton with [Team Canada] had a real calm approach with us. He really let us play and that’s what helped my development, just being about to go out there and make mistakes, go out there and struggle a little bit, so that I can bring myself up. It’s helped me.”

Witnessing Brown’s upbringing in Canadian baseball and seeing him on a plethora of occasions are the reasons the young player feels the Blue Jays believed in him enough to make him the top Canuck in the Draft.

Congratulations to OF Dasan Brown (@dasani_brown3) on being selected in the 3rd Round, 88th Overall by the @BlueJays! #MLBDraft2019 #OBJFam pic.twitter.com/acLieZjMkG

“It helped a lot,” Brown said. “Just them knowing what kind of player they’re getting. They’ve seen the ups, they’ve seen the downs, so trying to take that neutral [look] and go to the next step of my life and potentially have the opportunity to [play professionally], I’m looking forward to it.”

Kory Lafreniere, Toronto’s coordinator of amateur scouting, was the scout who selected Brown on Tuesday, after years of seeing the young player in action.

“It was a cool moment just because he’s been with me through this entire process so just hearing that call, that’s pretty cool,” Brown said. “He basically said, ‘We’re glad to have you.’ I’ll have to make a decision, but this opportunity is something different, something special, so just being able to enjoy this and moving forward and making a decision, I’m looking forward to it.”

Brown is one of the fastest players in the 2019 Draft class — if not the fastest — with 70-grade speed according to MLB Pipeline, and 80-grade speed according to Baseball America, and the athletic outfielder has been consistently ranked as the best Canadian prospect this year. He should be a plus defender, and though there is much room for improvement at the plate, he was heavily scouted facing professional competition with Team Canada, giving an easy glimpse into his future.

“Dasan is a quick-twitch athletic outfielder who has the ability to change a game with the speed he plays at,” said OBJ 18U manager Joe Ellison. “His athleticism has been something we’ve seen since he was 15 years old, but his hard work has paid off in the cages to improve his ability to hit, and hit with power, over the last three years. He’s also the type of player who doesn’t shy away from leading a team both on and off the field.”

Brown earned his first shot at Team Canada late in ’17 and helped his country to a bronze medal at the COPABE U18 Pan Am Championships in Panama last fall. But in between, he had an eye-opening experience in his first glimpse of Minor League Spring Training, something he believes will help him as he moves forward.

“My very first Spring Training trip in 2018, we were coming out of the winter, so we were in gyms, batting cages, all that,” Brown said. “We went onto the field, and I was 16 at the time, and we were playing grown men.

“These guys had been [playing outside] for a couple weeks, and you can’t have a child’s mindset when you’re going into that environment. So it really forced me to grow up and forced me to understand that I’m not going to be the best player right now, but it just matters the progress I make.”

Brown will look to take that mindset with him as he makes his next move. The 17-year-old outfielder is committed to Texas A&M, and the Blue Jays will have to pull him away from the Aggies. The slot value for the No. 88 pick in the Draft is $678,600.

“Wherever Dasan ends up, whether it be with a professional organization or at Texas A&M, he will succeed,” Ellison said. “Dasan’s work ethic and athletic ability will carry him throughout the remainder of his baseball career, no matter the level. Wherever he ends up after this week, that organization is getting a first-class kid with incredible talent and athletic ability that could produce at the highest level as he continues to develop.”

A version of this story originally appeared on BlueJays.com.