Before Tournament 12’s championship game on Monday night, two semi-final matchups were played to determine who would head into the final. BC Orange took down Atlantic Maroon 2-1 to secure their spot just before Ontario Black – a squad featuring 17 Canadian Premier Baseball League players and two coaches from the circuit – defeated Quebec Blue 5-1 to stay alive.

The Toronto Blue Jays-hosted showcase event brought more than 160 of Canada’s top draft and college-eligible players to the big-league stage, beginning on Thursday with a combine for upwards of 60 professional scouts and college coaches and finishing with the championship, after 18 games and five days. Players from the CPBL’s Great Lake Canadians, Ontario Nationals, Ontario Blue Jays and Toronto Mets programs took part.

Ontario Black was paced by Great Lake outfielder Lucas Parente in the semi-final, who had two RBI-triples, one scoring the first run of the game and the other sparking a four-run fifth-inning rally to ensure that the fourth edition of Tournament 12 would see another new province as its winner. He added an impressive inning-ending catch in the fourth inning to help stave off Quebec.

“We were saying it all game, he’s been hitting the ball really hard,” Black coach Chris Begg said. “We’ve been watching him make great plays in centre field, he’s getting good reads off the bat right away, and we’ve been impressed with him. This tournament is the first time I’ve seen him and I really like him. He’s a gamer. He’s not a big guy, but you can see the power he shows, he hits the ball hard, and he runs well.”

Canadian Junior National Team members Adam Hall, also a shortstop for the GLC program, and Noah Naylor, an Ontario Blue Jays catcher – currently the country’s top high school draft prospects for the 2017 and 2018 classes, respectively – each drove in a run in the matchup, with third baseman and Toronto Mets infielder Daniel Carinci adding an RBI of his own. After pinch-hitting in the top of the fifth, right fielder Antonio Cruz made an incredible diving catch in the bottom half of the frame to strand the bases loaded and keep the game where it was.

“We have some good leaders on this team, with the guys playing on the [Canadian Junior] National Team,” Begg said. “Then defensively this game we tightened up from our other games. Cruz made an unbelievable play in right field, that was huge, that was the turnaround play of the game right there. If that ball gets by him, it scores a couple of runs and then this is a one or two-run game.”

“Our guys on the mound have looked good, we’ve got guys who have good arms and have been able to throw strikes. With Noah behind the plate, he gives us some stability and shuts down the running game, so we’re pretty balanced all around.”

OBJ Right-hander Noah Skirrow got the start for the Black team, and after throwing four scoreless innings in its first game on Friday he threw four frames Monday, allowing one run on three hits with two walks and eight strikeouts. GLC righties Tyler Whalen and Mitchell Stemerdink combined for the final three scoreless innings. 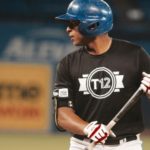 TORONTO – The fourth-annual Tournament 12 featured some impressive familiar faces, and three combined no-hitters on the second day of games on Saturday, two of them thrown by Ontario squads and using all Canadian Premier Baseball League hurlers.

In the second contest of the day, Ontario Green used three CPBL arms to no-hit Alberta Red, finishing the game in a scoreless tie. The first hit of the game was a two-out infield single in the bottom of the fourth, from Great Lake Canadians infielder Tye Imeson, who had two of the team’s three total hits.

“It was a combined no-no and the pitch counts were really low, so they did a great job,” said Mike Steed, a coach with both Green and the Ontario Blue Jays program. “In 1-1 counts, all you’ve got to do is throw that first-pitch strike and you’re in control. The other team absolutely pitched well, there wasn’t a whole lot of offence on both sides. They kept the hitters off balance and changed eye levels. Good pitching.”

OBJ southpaw Harley Gollert got the start and in three innings of work he walked one and struck out six. GLC right-hander Jake English followed out of the bullpen with two perfect frames and three strikeouts, before OBJ righty Nathan Holmes finished it off with two walks, fanning two in his two innings.

“They were excited in the dugout, the guys who threw,” Steed said. “Harley and then Jake, as soon as they got the last out in the top of the seventh, Harley looked at me and said, ‘Hey, combined no-no,’ so they know what’s going on and it’s exciting for them.”

Ontario Black followed suit in the final matchup of the day with a combined no-no of their own, using three more CPBL pitchers to get the job done and take down Alberta Red 4-0 to head into Sunday.

“It’s pretty great for the kids,” said Chris Robinson, a coach for both Black and the GLC program. “That was an impressive, well-pitched game. All those guys threw really well. I know Hassel was battling over a little blister there, and he went out for the second inning and he didn’t care, he pitched right through it. It was good.”

The hurlers got some help from 16-year-old Blue Jays catcher Noah Naylor, who threw out three attempted base stealers, set the tone behind the plate, and helped his squad to face just three batters over the minimum in the matchup.

“I told them to trust their stuff,” Naylor said of the pitchers. “The fastball was live today, and I just told them to be confident in it, and obviously that’s going to help them have a good game…I just try to be my best behind the plate, give them that insurance that they can trust me back there. I know when they’re throwing, they’re comfortable throwing to me, they can trust me with runners on the basepaths, and also with just doing my job.”

Added Robinson, a former big-league catcher: “He’s separated himself. It’s pretty exciting to watch. I don’t think I’ve ever seen a transfer that quick at this level, he gets rid of the ball so quickly. He’s got a great arm too but that was impressive.”

The Canadian Junior National Team catcher continues to improve with time, and has been nothing short of electric behind the plate at his second Tournament 12.

“He just keeps getting better every time I see him, especially behind the plate,” Robinson said. “It’s impressive. In my mind, there’s no doubt that he can catch at the next level, even now, and he’s still got a couple years to go. He’s a really exciting player.

“I know he’s going to draw comparisons to his brother [Josh, last year’s 12th-overall pick in the draft] forever, but that’s not fair because they’re two different players. But he’s got to be one of the more exciting catching prospects we’ve ever had in this country.”

Between the two CPBL-dominant no-hitters, Black lost an early contest against BC Orange 4-3, walked off on a wild pitch after battling through the fourth affair on Saturday.

Great Lake shortstop Adam Hall notched three of his team’s five total hits – one to keep the squad alive in the top of the seventh – and drove in two of Black’s three runs, adding two stolen bases and stellar defence. In three days of Tourament 12, the 17-year-old has made it clear why he is at the top of next year’s draft class.

“He brings a level of intensity every day to the field,” said Adam Stern, his coach with both Ontario Green and the GLC program. “He hates to lose, that’s the biggest thing you have to understand about Adam…That was a good game right there because you get to see when the game’s on the line what happens, who rises to the occasion, and he’s come up with big hits for us, he came up with big hits out here, and when the game’s on the line, you want him up there.”

Futures Navy ran short on pitching in the fifth game of the day, matching up against a tough Ontario Green squad and leaving the field after six innings because of the tournament’s mercy rule, taking the 12-1 loss in a game prominently featuring players from the GLC program.

Green used three Canadians arms to get through the game, with right-hander Corben Peters taking the hill to start and allowing one run on three hits with two walks and two strikeouts. Fellow righty Garner Spoljaric followed with two perfect frames, and Dallas Hunter retired the side in order to secure the win for Ontario.

“It was a well-pitched game,” said Ontario Green coach Rick Johnston. “We swung the bats, the kids played really well. It was nice for them to go out and do what they did. Obviously there were some walks in there, but that’s going to happen, and we put the ball in play.”

Ontario first baseman Jameson Hart, an outfielder in the Great Lake program, paced the offence, going 2-for-2 with two walks and driving in three runs. 16-year-old GLC catcher Ian Jordan drove in the only run for the Navy squad, singling and walking in the game.