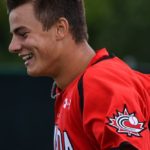 As the days to this year’s draft wound down, the 18-year-old Ontario Blue Jays and Canadian Junior National Team backstop anxiously looked forward to what the selection process might bring.

Although it didn’t go exactly as he had planned, because of nerves and a little bit of impatience, Van Rycheghem became the fifth high schooler from north of the border chosen, when the Arizona Diamondbacks made him their 23rd-round pick.

He immediately made the decision to head off into the professional baseball realm, and is currently on his way to beginning his pro career.

“It didn’t really go the way I thought, but turning it down was just too hard,” the native of Kent Bridge said. “I was way too excited to start playing professional baseball. It’s a huge honour to be drafted.

“My parents [Mark and Rosie] were so proud and my whole family was really excited for me. All my friends already got hats and jerseys and all that stuff. My dad was most excited for me. He couldn’t stop smiling, and he just seemed so proud.”

Working with the OBJ program over the last couple of seasons, along with getting help from a variety of resources, the 6-foot-3, 220-pound catcher has made it clear that baseball has always been a top priority, however difficult the circumstances.

“From Luke, I’ve seen his maturity and commitment to the game,” said Mike Steed, the director of pitching and college placement for the OBJ organization, and head coach of Van Rycheghem’s current team. “With Luke living in the Chatham area [three hours away], it was tough for him to get down a lot for workouts, but he and his family made a great effort to get him around our culture with the OBJ program. And, he can now hit the pitch on the outer half.”

Added Van Rycheghem: “I have always tried to work as hard as I can up to this day, and it has been my dream for so long to play pro ball. Both the Ontario Blue Jays and Team Canada have impacted my game. They’ve helped me improve every day…I’ve also been helped by [former big-league catcher] Chris Robinson, he has always been there to help me with my catching and develop me.

“And in Florida [with the Junior National Team], I worked with [former American League MVP] Justin Morneau. We worked in the cages on my swing and he gave me some pointers. Also, my dad has been a huge help – he does so much to develop me as a player and as a person.”

Not much has been different for the young player throughout his time with the OBJ program, steadily improving to get to where he is currently, but Steed believes his most consistent attributes will help him the most along the way.

“He really hasn’t changed that much, other than physically getting bigger and stronger over the time I have known him,” Steed said. “He has always been a sincere, genuine person with how he approaches the game, and people in general.”

The Diamondbacks should look forward to the addition of one of their newest Canadian rookies, and his coaches at home are excited for what the future may bring to the high schooler.

“Arizona can expect a young hitter with a power bat,” Steed said. “As he keeps maturing as a hitter, he will be a solid, middle-of-the-order type of player…I’m looking forward to watching Luke go through the day-to-day grind of minor league baseball. And I mean that in a positive way, because he loves the game so much I don’t think he will know it’s supposed to be a ‘grind.’”

Van Rycheghem is one of six players from the Canadian Premier Baseball League selected in the draft this June, among a total of 12 high schoolers hailing from north of the border. Toronto Mets catcher Andrew Yerzy was taken in the second round, 52nd overall, also by the Diamondbacks. OBJ hurler Jordan Balazovic followed in the fifth round, taken 153rd overall by the Minnesota Twins.

“With all our picks from the OBJ organization, we are extremely proud of these young men for what they have accomplished,” Steed said. “And the OBJ organization is glad that we could help develop Luke and give him the opportunities to reach this next step in his baseball career.”

Toronto Mets southpaw Matt Jones was taken in the 28th round, also by Minnesota. Great Lake Canadians right-hander Austin Shields was chosen in the 33rd round by the Pittsburgh Pirates organization and GLC outfielder Jake Wilson was taken by the Boston Red Sox in the 39th round.