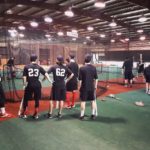 Excited about the success of the Canadian Premier Baseball League in its first two seasons and the way the circuit has aided in the development and expansion of their program – in addition to winning three of four championships last year – the Great Lake Canadians are looking forward to even more in the third season of the loop.

“We had a pretty good year last year as a program, and the product of seeing our guys go off to school and have success because they’re playing against the top talent in the country in our league,” GLC director of baseball operations and CPBL executive Chris Robinson said. “That’s in and of itself the reason that we started this.

“So it’s exciting to see not only our guys, but guys across the CPBL from different programs go down to college, be prepared, step in, and early in their careers have success and be big parts of their teams. When it’s all said and done, that’s what we were aiming for, so it seems to be really effective that way.”

During the most recent winter, the Canadians added a squad to the fold, and made multiple changes to their staff, with some additions and some movement, and they can’t wait to see how the differences translate to the field.

“We added one team this year, so now we have two 15U clubs,” Robinson said. “Our young 14U team last year pushed the envelope a little bit because of how successful they were [winning the CPBL 14U championship] and because of how quickly they developed. So we’re excited to add that piece, and we adjusted some of the staff, putting guys in positions where they’re going to be successful and dealing with players that are the best fit for them.

“Jeff Helps is going to manage the 16U team, Brock Kjeldgaard is going to jump up to the 17U team, and Derek Bloomfield, who’s been a long-time rover and jack of all trades for us, and knows the program inside and out, he’s going to take over the 15U Red team.

With the addition of a second 15U squad to the Great Lake Canadians fold comes a shift in the coaching staff, and the organization is very excited to announce that @derek22b will be taking over at the helm of the newest team: https://t.co/cDEn3GtxvP

“We’ve added Jon Fitzsimmons on the pitching side, and we’re really excited about that, and to have Brendan Saville and Ryan Zimmer, guys we’ve been able to add who are local and tremendous coaches to add to the stable we already have here. It’s exciting and it continues to grow, but we’re also able to grow as a staff with it and add guys with the calibre of coaching that we have.”

Another piece added to the Great Lake puzzle this off-season was the announcement of several organizational awards as the Canadians made an effort to recognize the accomplishments of current and former players with bigger plans for the accolades in the fold for the future.

“The awards were neat, and something that [director of player development Adam] Stern has wanted to do forever,” Robinson said. “It’s a great idea, and recognizes some guys within the program, and some of our alumni. It’s neat to see our organizational MVP Noah Myers is down in college doing what he’s doing and having a tremendous amount of success there.

In the spirit of celebrations this holiday season, we are proud to announce our inaugural Great Lake Canadians award winners, recognizing and honouring the accomplishments of our current and former players. Congratulations to these 20 players: https://t.co/U8rtwliesW #GLCfamily pic.twitter.com/6mYArCdXdr

“And then for guys within the program it’s nice to acknowledge what they’ve done throughout the whole year on the field and off the field. Hopefully the kids look at it as something they want to shoot for. Going into this year, we’re planning a big banquet, and it would be neat to put everything together and bring the family in all at once and celebrate the year in that banquet-type setting.”

After an incredibly successful second season of the CPBL in which Great Lake teams won championships at the 14U, 15U and 18U age groups, the organization believes there is still much more to accomplish as it moves forward.

“I don’t think we ever evaluate the development process on wins and losses, but it’s good for the kids to see the hard work paying off and buying into the process,” Robinson said. “Our 14U Red team was a perfect example of that, where they really bought in, developed so quickly, and they were a tight group so it was neat to see them have the success that they had. Our 17U team was great, winning the championship at the 18U age group, and our 15U team was great, winning the championship there, but our teams that didn’t win were very successful too, so we were lucky to have really strong baseball clubs from top to bottom.

“That’s the expectation for us and we expect our guys to show up to the field and have that desire to win and the instinct to win baseball games. That’s what it has to be at the next level, so if we can prepare our guys for that, then we’re doing what we’re supposed to be doing.”

Robinson is looking forward to getting the CPBL going to not only see how the Canadians fare on the field, but also in the hopes of having a successful opening weekend showcase and tournament, with eyes on a midsummer classic as well, after bad weather interrupted a variety of the league’s plans over the first two seasons.

“We had so much interest in that opening weekend [last year], so I’m hoping that we can generate the same interest level,” Robinson said. “Obviously with some of the draft-eligible guys from throughout the league, we should be able to make it a weekend where people are coming up to watch. I’m starting to hear from scouts and schools that they’re going to be here, so that’s exciting for us because it’s one event that we have really wanted to develop.

“The all-star game is still a swing and miss and we want to make a couple adjustments to it. We didn’t figure it out last year but hopefully this year we can do it in a way where it becomes a recruiting event for some of the younger guys in the league, and to recognize some of the guys in the older age groups who have had good seasons. That’s the goal, but we continue to build the product, play games that are competitive, and continue to separate ourselves as the best league in the country. That’s what we’re looking to do.”