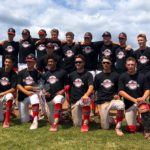 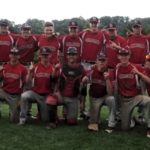 The Great Lake Canadians have taken the crown, and are the second champions of the Canadian Premier Baseball League in the circuit’s second season, shutting out the reigning-champion Ontario Blue Jays 18U squad 5-0 to win the 18U championship.

Fighting through the playoff weekend, the Canadians faced Team Ontario in their first matchup on the final day of competition, advancing with their first shutout win of the day. Griffin Hassall threw all seven innings in the semi-final, allowing five hits, walking one and striking out six Team Ontario batters to help his team into the championship. Jacob Douglas followed with seven strong frames of his own in the final, allowing five Blue Jays hits, walking one and fanning one to make it official.

“We played Team Ontario the first game, and Hassall threw a gem, and then it was the 18U OBJ team and Douglas threw an absolute gem,” GLC 17U manager Jeff Helps said. “We definitely had some players who, if they performed, we were going to give ourselves a chance. Anytime players perform to the best of their abilities, you give yourself a pretty good chance to win, and that’s kind of how this final weekend played out for us.”

The win followed a regular season that saw the squad finish fifth in the overall standings with an 11-8 record before playoffs began and before they caught fire at the end of the year.

“This was a team that started off pretty hot actually,” Helps said. “Our opening weekend against the Fieldhouse Pirates, we started off hot. Then we had some ebbs and flows throughout the year, and the team has really been playing well the last few weeks, especially in the States in our American tournaments. We were almost kind of setting the tone for heading into this week. The boys were playing pretty well, and then finished off the year playing the best ball they did all season.”

Throughout the year, Helps was proud to see his team’s successes and growth, both on and off the field.

“It’s hard to pick one thing that was most impressive about this group,” the 17U manager said. “The pitching staff was pretty impressive. We had 14 innings of scoreless baseball on the biggest day of the year. But it was their resilience. They didn’t get too high, didn’t get too low, and they stayed focused on what they needed to do, and didn’t get too worried about other players and other situations. They just focused on the task at hand.

“It was pretty impressive to see when they mature that way throughout the year, and then put it together. I don’t even think they realized how well they could play together when they played the game the right way.”

With everything on the line throughout the playoff weekend and into the championship matchup, the Canadians played their best baseball together at the right time, and left the field gratified.

“Like any group, we had ups and downs, but the season was pretty satisfying,” Helps said. “We definitely had some discussions throughout the year, whether it was myself or the other GLC staff, trying to get them to understand and develop and grow, obviously as baseball players but also as people. It was pretty fun to watch them celebrate the win. It was a pretty neat feeling for myself and the rest of us to watch them do what they did.”

With several players from the championship group returning to join Great Lake’s 18U squad next season, Helps is hoping that the win drives them to work even harder until they can get started again, and find even better results next year.

“We’ll get a few of those guys coming back for sure,” he said. “It’s probably exciting for them to get to that point and win, and when you get a taste of winning, you want to do it again. Hopefully that helps to drive them through the fall and into the off-season, to get them ready for next year.”