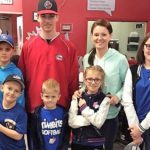 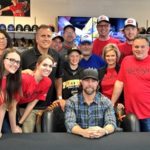 MISSISSAUGA, Ont. – It’s the glove of the game.

Rawlings is more often than not one of the most well-represented brands on the field – known best for its gloves, but also supplying players with options for every baseball need – and now the company can say the same off the field, at least at one store in Mississauga.

On Saturday, Home Run Sports held its Grand Opening celebration for the launch of Rawlings’ first concept store in Canada, and the most elaborate of its kind anywhere. After taking over the space next to its original location, Home Run partnered with Rawlings to designate a large amount of square footage to the brand.

“Rawlings is such an expansive program and broad product mix, we wanted to take this chance to showcase everything,” said Randy Beatty, General Manager of Rawlings Canada. “It’s very difficult for even a store of this size to show everything we sell, so we teamed up with Home Run on the ability to work with them on this concept and make sure the full line was represented in its entirety.

“New products will come here first, and if there’s something different we want to showcase or promote, it gives us a chance to do that here.”

The launch also provided a unique opportunity to the store and the brand to host Cy Young Award winner, Gold Glover, Rawlings advocate, and Toronto Blue Jays hurler R.A. Dickey, who made his way to the store just after his team’s 9-3 win over the Oakland Athletics at Rogers Centre on Saturday afternoon.

“My loyalty probably speaks louder than anything,” Dickey said. “I’ve been with Rawlings since I’ve been 12 years old. It was my glove in college, and then when I got to pro ball I loved the product so much that I stayed with it throughout. Then I was fortunate enough to win a Gold Glove in ’13 and I got my gold label and that was it.”

Added Scott Neiles, CEO of Home Run Sports: “It was a perfect fit with him being a Gold Glove winner. As he mentioned, he’s been a Rawlings guy since he was 12 years old, and it’s always more special knowing that you have a guy who believes in the brand.

“And this opportunity, for him to come out after a game on a Saturday, knowing they have an early day Sunday, it speaks volumes for him and the relationship that he has with Rawlings and the people of Toronto.”

With the excitement of the store’s addition, and the opening of the first concept store of its kind, Beatty believes that having one of the reigning American League East division champions join the Home Run Sports and Rawlings teams at the event was an added bonus.

“This is the icing on the cake,” he said. “When we started this, we worked with our Home Run Sports partners and we wanted to create something that was a little different. Things are displayed in a much different format, and to have somebody show up who is a Rawlings Gold Glove Award winner and a true professional in the game is just the icing on the cake for this event.”

While there are five stores across the States dedicated to Rawlings-only products, they are outlet locations with different offerings than will be found in Mississauga. Known first and foremost for their leather, Rawlings is looking forward to the opportunity to showcase everything they have available.

“The general consumer might think that Rawlings is just gloves, but the player has a much better understanding because every helmet’s a Rawlings helmet, every ball is a Rawlings ball, half the players in the major leagues use Rawlings gloves, but there are more than just the gloves,” Beatty said. “That’s what comes to mind when you think Rawlings, but this makes it easier to see.”

Should the concept store continue to find sustained success at its current location, the brand could expand at the other Home Run Sports locations across the country north of the border.

“We’re going to have absolutely everything they carry in the line, so we’re going to keep expanding as more stuff comes in,” Neiles said. “Rawlings has quite a big name worldwide, and not just for ball equipment.

“Obviously people associate that with us but hopefully we can get into some of other items they offer and keep growing it. The intention would be if this goes as well as we think it will then maybe we can try and implement it in some of our other stores across Canada.”

The concept store had a soft opening in February, with inventory in and an opportunity for people to peruse and shop before the Grand Opening. Since then, additions and changes have been made, but the response so far has been all positive.

“It’s been very good,” Neiles said. “You can’t not notice it, because it jumps out at you. It’s new, and in a sporting goods world we’re so used to things looking the same. This adds a little more pop. It’s going to put pressure on us to update the other side of the store now, so it’s a constant battle of keeping things looking fresh all the time, but it just looks awesome.

“You take it for granted when you see it too often but when you see the lineup of people outside for R.A. Dickey and you step back and look at it, it’s pretty special.”