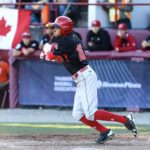 Down to his last day with the Canadian Junior National Team, Dondrae Bremner is hoping to move onto his next step and head to the University of Cincinnati with a bronze medal in his back pocket.

Before joining the Bearcats, the 18-year-old infielder and the rest of his Team Canada teammates will take on Japan at the World Baseball Softball Confederation’s U18 World Cup, Bremner’s final matchup with the group. The bittersweet moment will signify the end of an era in which he’s made the most of every moment, and is extremely grateful for.

“It’s been a really good time,” the 31st-round draft pick of the Cincinnati Reds said. “I love all the guys. I’m really going to miss it, especially playing for my country. I feel like this opportunity has prepared me for both university, and if I do get drafted in my junior or senior year. I feel like it’s done a really good job of that…

“It’s weird thinking that I’m pretty much not going to play with any of these guys ever again. It’s been a blast. I’ve loved it. But it’s been a little sad these last couple of days, realizing that it’s almost over and I might not see them.”

Bremner’s final trip began with two immediate World Cup losses to Chinese Taipei and Korea at Port Arthur Stadium in Thunder Bay, leaving Team Canada in a hole it had to win its way out of. An epic ninth-inning comeback against Italy got the team started, and after rolling through Australia and Nicaragua, it was onto the super round, where it beat Japan and Cuba to secure a rematch against the Japanese squad for bronze on Sunday.

“We had a really good start, but we just couldn’t pull out the wins,” Bremner said. “But the intensity has gotten way better, and as a team we’re getting the job done. These last games have been really exciting…International baseball is exactly what Greg [Hamilton, Baseball Canada’s director of national teams] said it was going to be – high intensity, and we’ve pretty much got to be all in if we’re going to win.”

Hoping the crowd is on his team’s side on Sunday, the Toronto native believes the fans in Thunder Bay played a prominent role for the host nation early in the tournament, and in its most intense matchup, and will take all the help it can get as it fights for a medal.

“The crowd is amazing and that’s helped us,” Bremner said. “Some games, they haven’t been as intense as they were in the Italy game, but the crowd really helped us out in that game because they got us going…

“Against Italy, we played a good game. I felt like at the beginning we were putting too much pressure on ourselves and we weren’t doing what we needed to do. But towards the end, it got really intense, because we started playing the way we usually do, and we came back and pulled out a big win. This whole tournament has been a blast. I love it, especially playing for your country in front of your fans.”

Helping prepare Bremner for both his adventures with the Junior National Team as well as moving onto the American Athletic Conference has been the Toronto Mets program, where he has impressed with his development both on and off the field.

“Playing for the Mets really developed me, especially playing in the [Canadian Premier Baseball League],” the shortstop said. “We don’t usually see any arms that aren’t good; there are good arms coming at us every single game.

“Pretty much the talent here with the junior team, and in our league with the Mets, has been really good, and the coaches in the league have done a really good job of prepping me for what’s next.”

One of Bremner’s coaches over the years has been Chris Kemlo, who has seen firsthand the amount of progress the young player has made, and is excited for his next step, knowing that his ceiling is yet to be determined.

“He’s come from being a skinny kid with little strength and lacking confidence…to somebody who wants the moment. He wants that at-bat with the game on the line, wants that ground ball with the game on the line, wants to be the guy. That’s the biggest thing. Obviously his body’s changed but his baseball IQ – forget all the tools – the way he approaches the game and the kind of person he is, those are the biggest changes.”

Beyond looking to get into game action with the bronze medal on the line on Sunday, Bremner is also excited to get the next step going once the World Cup comes to an end.

“I’m excited to go to school and get ready for the college life,” Bremner said. “Especially being down here, we go on two-week trips or three-week trips, it really preps you for being on your own and not with your parents. I feel like it’s done a really good job of that, so I won’t be scared or anything of university. I’m pretty much used to not being with my parents.” 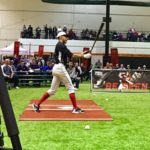 The 17-year-old Mets and Team Canada shortstop stood out among the crowd of talented players hailing from across the 34 states and single province with PBR branches, impressing in front of many new sets of eyes, and some familiar ones.

“He certainly held his own,” said Nathan Rode, PBR’s national supervisor. “We’ve seen Dondrae, whether it was myself or others on our staff, several times, and he’s improved markedly each time out. Coming into an event like the Super 60, where pretty much everybody is a high-level draft prospect or high Division-I prospect, to even blend in is a good indication of the talent level. But he didn’t just blend in, he played well and showed good actions and a good swing, and certainly made a name for himself.”

Following in the footsteps of former Great Lake Canadians catcher Max Wright – currently a freshman at Indiana State – and Ontario Blue Jays backstop Luke Van Rycheghem – now a member of the Arizona Diamondbacks organization – who were both invited to last year’s event, Bremner became the third Canadian participant of the Super 60 showcase.

“I thought it would be a cool event and it looked interesting, and a lot of scouts come out here, so I figured it would be good,” the young infielder said. “This is probably one of the best showcases I’ve been to. They ran through everyone pretty quickly. There were only 60 guys to get through and not that many position players. I like how they went through their three different stations, checking our swing plane and then they had our exit velocities, and then they had live hitting. The whole thing was really well run.”

To warm up before taking batting practice swings, each of the position-playing participants at the event hit off a tee, utilizing Diamond Kinetics technology to take measurements throughout. With a device added to the end of the bat, Bluetooth-connected to a tablet, the players’ bat speed and swing plane were measured, with Bremner posting an 89-mile-an-hour exit velocity.

Impressing during the live-hitting portion of the day, showing quickness to the ball and making consistent, solid contact to all fields with ease, before displaying his agility and defensive prowess with a couple of extremely athletic plays on the infield, and after running a 6.78-second 60-yard dash, Bremner wasn’t completely satisfied with his performance but he was excited at the chance to get his season started in a big way.

“I really like the facility they have here, and they had a good turnout,” he said. “There were a lot of scouts, and all of the players here looked really good. My 60 time wasn’t my greatest, but when I was hitting I felt really good, and then my defensive work wasn’t my best. I haven’t thrown in a while and I haven’t done as much throwing as I should have. I should have prepared better for that.”

Just getting into the second month of his pre-season workouts with the Mets and not taking the field outside until his first trip of the year with the Junior National Team at the end of March, Bremner attempted to prepare for the showcase in Chicago by emphasizing the continued development of his speed, and is looking forward to when he can play in real games once again.

“When you’re at a showcase tournament, as opposed to something like this, you’re trying to show off how good of a teammate you can be, doing your job and getting that job done,” Bremner said. “But here you’re pretty much just showcasing your skills, like how hard the ball can come off your bat and how hard you can throw and how fast you can run…

For PBR Ontario scouting director and head coach of the Toronto Mets 18U squad, Chris Kemlo, it has been exciting to watch the young player as Bremner has progressed throughout the years that they’ve known each other, becoming much more well-rounded as time has gone on.

“Bremner has improved in all areas of the game,” Kemlo said. “Offensively, defensively, the mental side, his baseball IQ and also physically, putting the time and effort in the weight room. He takes care of his academics, supports his teammates, and in general is a solid human being. He’s always had a feel for the game defensively, since I first met him.

“He’s had to put a little more focus on the offensive side, honing his swing, and understanding his approach at the plate and what works best for him. The key thing is that he has continued to develop every year, getting stronger and quicker, building his mental side, and understanding that you are going to experience failure…It’s been fun to watch him improve and grow as a player and person, and I’m pretty sure there is a lot more to come.”

Happily representing the Canadian baseball community on his own at the Super 60, Bremner didn’t think much about that fact until afterward, and was proud to be a pleasant surprise to some who are less familiar with the talent that the country north of the border consistently produces.

“I try to block it out, because that just puts more pressure on me,” he said. “But I do like that I was the only one representing Ontario down here, and I feel good about it…Some guys get surprised that I’m from Canada but pretty much everyone here is a good competitor and that’s what we were expecting, so it’s pretty much all the same level of competition here. There are guys who are impressed when they play against a team of Canadian guys and we can compete with them, but it shouldn’t be a surprise because we’re competitors.”

As the young shortstop continues to make a bigger named for himself among his peers, the Super 60 was just the opening of a big season for Bremner, who will begin his tour with Team Canada for spring training in Orlando in March, follow with another Orlando trip in April and then head to the Dominican Republic in May, with Mets games both in and outside of the CPBL in between.

Hopeful for the draft in June, Bremner has committed to the University of Cincinnati and could also be a part of the junior squad that will take on a slate of other nations at the WBSC U18 World Cup in Thunder Bay beyond his high school graduation.

“I’m excited for it,” Bremner said of heading into the final frontier. “I can’t wait. It’s pretty much been my whole desire my entire life is to get to this process, and either going through the draft or going to Cincinnati for school. I’ve been looking forward to this time pretty much my entire life and as long as I’ve been playing baseball.”