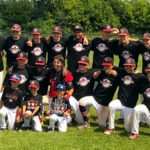 Heading into the postseason of the Canadian Premier Baseball League’s 15U level, the Great Lake Canadians were looking to repeat the success they’d had last year — seeing both their Red and Black teams in the championship final battling it out to see who might have bragging rights for another year.

As the 15U playoffs dwindled down to the circuit’s final two teams this season, Great Lake replicated that success, with the Canadians’ Red squad — led by manager Brendan Saville — taking down the Black team — led by last year’s championship manager Derek Bloomfield — to secure the trophy for the program.

“It was an awesome experience,” Saville said. “It was really cool because it was my first year managing, so obviously these guys had a special place in my heart and I was so ecstatic for them. Earlier in the season, we lost to GLC Black in our tournament by one run in the last inning, and it was a tough way to lose and everyone was a little heartbroken. It certainly left a bad taste in my mouth.

“So it was really nice to see all the guys rise to the occasion to play, to beat an outstanding baseball team coached by an outstanding manager in Derek. I was really excited for those guys. It was a really cool visceral experience of happiness and joy. It’s always exciting to watch a bunch of young guys have the opportunity to experience success on the baseball field who have been working really hard all year.”

When Saville got his first glimpse of the squad he would be at the helm of for the 2019 season, he was excited about the potential it had, but didn’t know how far it would come in such a short time together.

“I originally thought the team was made up of a lot of really sound baseball players and that we had an opportunity to do something with the talent we started with, we were just really young,” Saville said. “I thought it was going to take a lot of work in terms of being able to specifically beat the Black team.

“We didn’t have the same size or physical ability and physical talent they had, and we were going to have to play a lot of small ball throughout the season to be successful. As the season progressed, things continued to grow and we started to thrive on ourselves. We were able to really show up when we needed to, in big games, and played some really sound baseball, especially on the defensive end. That most likely won us the championship and got us to where we were.”

Great Lake began its playoff weekend against the Fieldhouse Pirates, before a win led to a matchup against the Tri-City Giants, which helped propel the squad further into the tournament in more ways than one.

“Tri-City had really taken it to us all year pretty much,” Saville said. “For some reason, we weren’t playing well against them. It was probably our biggest win of the season in terms of momentum, winning that game. It was a good all-around team effort win, riding on the momentum of Fieldhouse and battling and battling…

“We had only won once against Tri-City all season and they had been the team we just couldn’t figure out, so obviously we wanted our guys to create the opportunity to unlock the lock with the key.”

Among the qualities his squad brought to the table throughout the season, there was one that stood out the most for Saville.

“The biggest thing that we talked about all year was trying to make sure not to give up and to really keep the energy alive,” he said. “We may not have had the same energy levels for every game, but when it came to a big opportunity or a tournament, the guys really rose to the occasion and specifically they played as a unit and as a team.

“It’s rare to find a group of 15-year-olds that comes together and is cohesive enough to actually play as a team and put all egos aside to win. These guys definitely did that and it was really fun to coach them.”

The championship was one of four for the Canadians program among the five levels of the CPBL, also winning at the 14U, 16U and 17U age groups, with the Ontario Blue Jays taking home the trophy from the 18U division.

“It cements itself as one of the top development organizations in the country,” Saville said of Great Lake. “To play in a league like that and to be able to walk away with four out of five is unheard of. If that’s not domination, I don’t know what is. Chris [Robinson] and Adam [Stern] and Shane [Davis] and everyone have done a really good job of piecing the puzzle together and we’re all ecstatic to be a part of that organization.

“There’s a really big sense of pride in being part of something that is clearly working and does it the right way…and then seeing those kind of results happen. The organization is flourishing and it’s cool to be a part of something so great.”