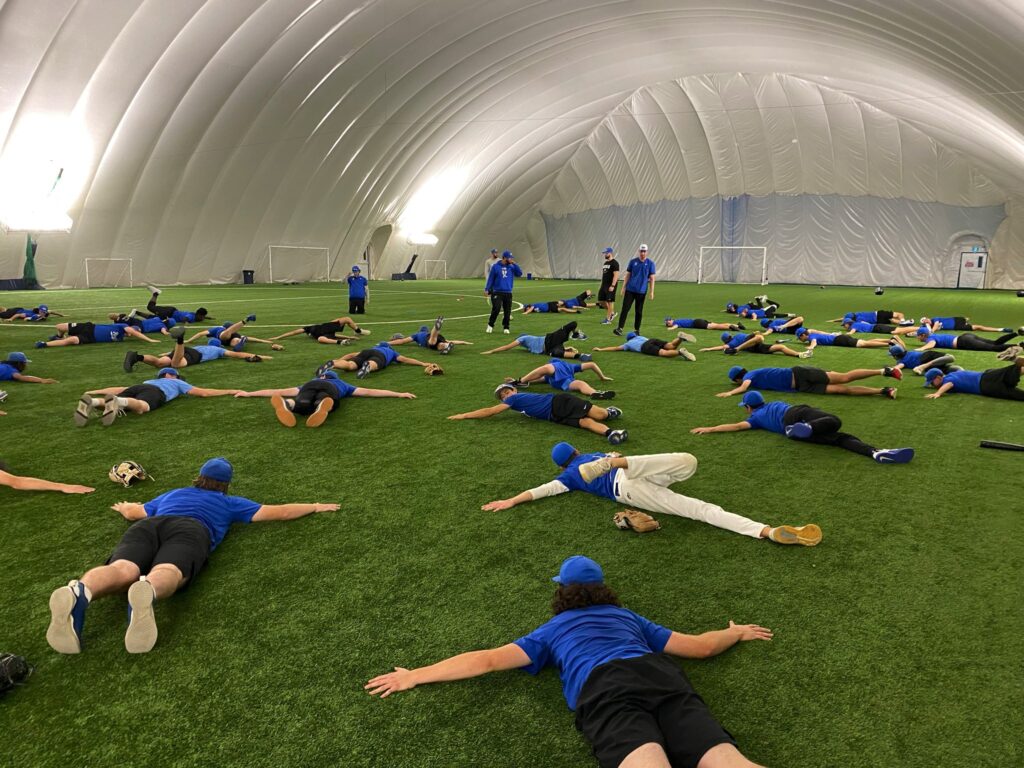 The Ontario Royals look forward to the 2022 season after their first year of CPBL competition.

First and foremost for General Manager of the Royals, Matt Mills, “the main highlight was getting back onto the field in June and competing in our first CPBL season.”

During their inaugural campaign, Mills noticed significant growth at each the 15u, 16u and 17u levels. Stating, “each or our teams showed dramatic improvement throughout the season in 2021, and proved they belonged in the top amateur league in the country.”

Leading the Royals’ clubs alongside Mills in their expansion year were new head coaches Ryan Balan and Mattingly Romanin. Mills credited both of them for their efforts, stating they “established themselves as strong leaders of young men, and paved the way for a strong 2022 season for the club.”

Our 18U grads got together as a full group for the last time this weekend.

Best of luck in all your baseball and academic futures, gentlemen.#RepTheCrown 👑 pic.twitter.com/YEEnAGAaZF

Meanwhile, another notable highlight for the Royals was the completion and utilization of their practice field. The location features a full infield, half-outfield and bullpen on the same site as the Royals’ Indoor Facility and Strength and Conditioning Facility.

Heading into the new year, four members of the upcoming graduation class have commitments. Alex Gaudet is headed to Cayuga CC, Jack Lamont to Bethany Lutheran College, Seamus McGrenere to Bethany Lutheran College and Jorge Maza Leon to Williston State College. With a number of other 2022’s set to commit soon, and 2023 LHP Jacob Malinauskas committed to the University of Missouri.

The 18u club, which will feature each of the committed players, is one in which Mills expects “to be highly competitive. For many of our 18U players this is their second year at that level and that experience should serve them well once the season begins.”

“Our 18U roster sees 11 players return from a young 18U roster last season. Additions to the pitching staff and in the outfield should solidify a strong roster that will look to improve on a strong effort in their first season in the CPBL in 2021.”

Meanwhile, the Royals added a 17u club for 2022. Mills noted, “this group is highlighted by pitching – Jacob Malinauskas, Ethan Rampersad, and Zev Salsberg, should provide a strong foundation on the mound throughout 2022. Much of this group has stayed together from the 16U level and should be a tight-knit and gritty, competitive team this year.”

“Our 16U roster is probably our highest ceiling roster in the program. We’ve overhauled our roster with 13 new faces, along with our new 16U coaching staff led by Jonathan Kovack. We have depth on the mound, and physical ball players who can impact the game on both sides of the ball. I’m excited to see this group compete and grow as they progress through the Royals program.”

“Led by head Coach Ryan Balan, our 15U roster is full of talented baseball athletes. We had an extremely young 15U group last year that returns 6 players to our 2022 roster, which should provide a strong core for that group, especially on the mound. Coach Balan is also excited about the new talent that’s come aboard, and says he’s looking forward to competing at a higher level in 2022 than the team did in 2021.”

With an added 17u team for 2022, a pair of coaching additions in Jonathan Kovack and Tyler O’Brien, and a year under their belt in the CPBL, the Royals look forward to taking another step forward in the new year.

“We hope more than anything that we can return to a normal season and travel schedule for our players and program in 2022. Beyond that, we look forward to being competitive with all of our teams, and continuing to help place our players in great baseball and academic opportunities at the next level,” said Mills.