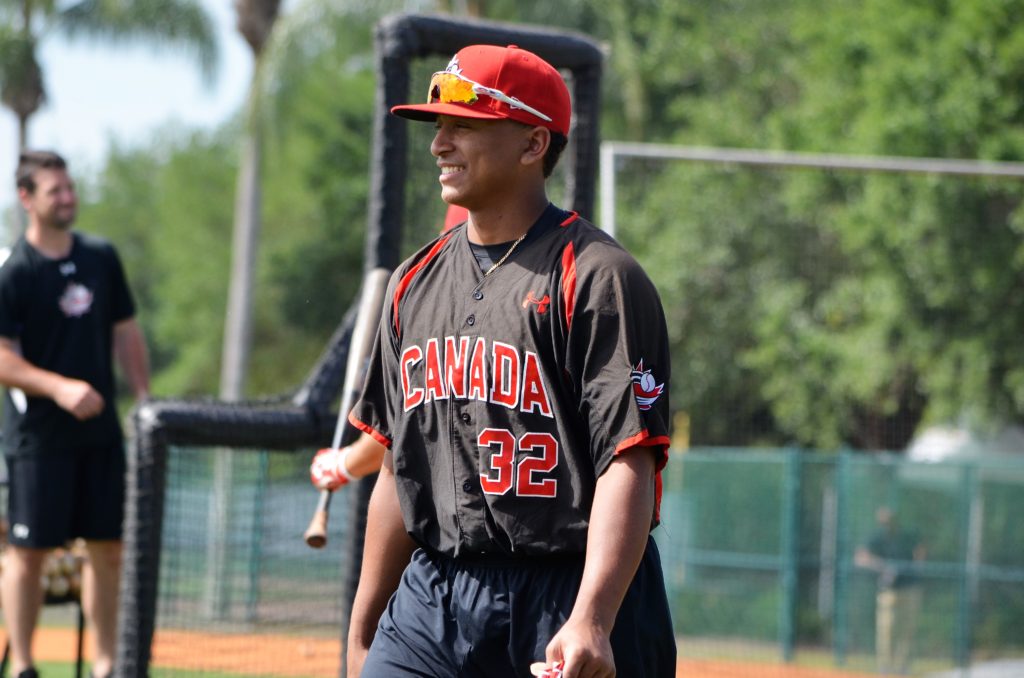 Heading into the World Baseball Softball Confederation’s U18 World Cup on home soil in Thunder Bay, the 17-year-old catcher and third baseman had watched from afar when his brother Josh – the 12th overall pick in the 2015 draft – played for Team Canada on the world stage in Mexico and Japan.

“This is one of the biggest events overall,” Naylor said. “Playing against different countries, representing Canada across my chest, it’s definitely something to be thankful for…Events as big as this, seeing other players go through it, like [Canadian 2016 second-rounder Andrew] Yerzy, Josh, and a whole bunch of others, it’s just something that I’ve always dreamed of being in.”

Joining the Canadian Junior National Team almost two years ago, Naylor learned from his older teammates what the experience was like in those other countries. The native of Mississauga and his teammates had also gleaned insight into what it might be like from Greg Hamilton, Baseball Canada’s director of national teams.

“This is amazing,” Naylor said. “Having the home crowd behind you, and Greg has preached this a lot, having the sea of red in the crowd, it’s…an unreal moment for a few days, and I look forward to everything that comes along the way.”
But the experience has really been something that Canada’s current top prospect heading into next year’s draft has needed to feel firsthand to fully understand.

“It’s been amazing,” he said. “Being around my brothers, playing with them, and having a great time outside of the game as well. We’ve got a good chance ahead of us, we just need to stay with our game and just play our hearts out and not take anything for granted.”

Entering his third year with the junior squad and his final season with the Ontario Blue Jays after the World Cup, Naylor has spent much of his time drawing comparisons to his brother while trying to create a path for himself.

“I’m still in the midst of creating my own identity,” he said. “Having Josh going through this whole thing before me has been helpful. He’s told me about all of his experiences, and I’m just trying to make it all my own and build my career around me, and give thanks to everybody who’s helped along the way.”

When the younger Naylor was first invited to join Team Canada, he was originally given a jersey with the No. 35, the same digits his older brother had worn through his four years with the national squad. A little less familiar to all those around him than Josh was at the time, Noah asked if there was any possibility of a trade.

“I asked for a different number,” Naylor said in the spring. “I didn’t want to change anything, but it’s probably more about creating my own path rather than having the same number and doing everything the same as Josh.

“I’m obviously honoured and thankful to have him as a brother, and to carry the same legacy on and have the same number, and that would be cool, but I felt like a different number would be different for me, just to see me go through a different path. It’s something that I look forward to.”

Ironically, at this year’s World Baseball Classic – Josh’s first opportunity to play with the senior national team – he was given Noah’s new No. 32. But with a couple of seasons under both of their belts since the original switch, and a multitude of chances for Noah to separate himself, it was something for the brothers to laugh about.

“We definitely have differences,” the younger Naylor said. “Since Josh is a lefty, he’s definitely limited in terms of positions, but we’re two different players hitting-wise because he’s more of a power guy, and I feel like I’m more of a line drive, gap-to-gap guy with a little bit of pop. That’s the main difference between us, besides the fact that he’s bigger and he’s got a really good arm and stuff like that. Other than that, there’s not too much different about us.”

A left-handed hitting backstop and infielder with good bat speed, a strong arm, an impressive ability to hit, and some power, Noah has been nothing short of impressive on his own merit throughout his high school career.

“Noah brings a lot to the team,” Hamilton said. “He slows the game down, he plays under control, he plays with confidence, he’s a good, complete hitter, he gives you a good at-bat. I look at him as a good hitter with some power, as opposed to his brother, whose power kind of defined him but he was also so good hitter. I see the inverse with Noah, being a good hitter with some power. Your eyes don’t pop out with the power, where with Josh it was the power.

“They’re different personalities too. One’s going to run overtop of you and step on you to beat you, and the other competes very well. With Josh it was a vicious competitive streak, and a good kid outside of it but he was going to be a real tough, hard-nosed kid on the field. Noah plays pretty level, and plays with ease, and he has a more laid-back type personality, but he has a really good chance to be a really good hitter.”

While Josh’s competitive nature may have been more evident in his time with Team Canada, Noah believes that is definitely something they have in common.

“We compete in anything and everything, you name it,” the Texas A&M commit said. “Whether it’s a video game, or just pick-up basketball or anything. We’re definitely competitors. That’s something that we do share with each other, and I don’t think that will ever go away…

“He always beats me at video games. I don’t know why, there’s something with them, he’s always been good at those and I can never get one over him. Maybe the occasional game I’ll win, but it’s an effort, and never really by a blowout or anything like he would beat me. But for outdoor sports like basketball, pick-up hockey on the street, I would beat him at that. I like being outside more, but that’s kind of how it’s been throughout our lives.”

The middle child among three Naylor boys – 12-year-old Myles a standout talent in hockey and baseball – Noah has started to take charge a little bit more on the field lately than ever before, stepping up as one of the longest-tenured players currently wearing the red-and-white uniform.

“I do portray a little bit of a leadership role, but I definitely feel that as time goes on, I’m going to have to start to pick it up,” Naylor said. “Along with some of my other teammates, be a leader for everyone to look up to and follow, because why would I want to be someone who nobody would look up to or follow?

“Seeing these guys leave, they definitely helped me and I hope I’ve helped them get better. Being a leader, and showing the next group or some of my other teammates, helping them get through everything, that’s the key.”