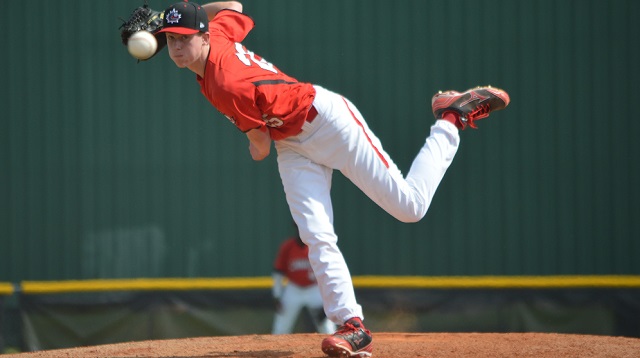 With added size and a new level of all-around maturity, Matt Jones is ready for the world of professional baseball.

Selected by the Minnesota Twins in the 28th round of this year’s draft, 843rd overall, out of Sinclair Secondary School, the young Toronto Mets and Canadian Junior National Team hurler couldn’t be more excited to get through the red tape and head out into the pro ranks.

“It has always been my dream to play professional baseball,” the 17-year-old southpaw said. “Going into the draft, I wasn’t very sure if I would be selected or not, because the draft is really unpredictable. I had a feeling I would get selected but I wasn’t 100 per cent sure.

“Overall, I’m really happy with how it went. To be one of the 25 [Canadian] guys chosen is very cool, especially when you think about the talent of Canadian players who were selected, like [eighth overall pick] Cal Quantrill and [second-round selection and Mets catcher] my friend Andrew Yerzy. It is something you will always remember, being a part of that specific group of guys.”

While the native of Whitby has made many improvements throughout his time with Team Canada and the Mets program, the biggest factor in aiding his progression of late was his ability to add size to his frame, and gain strength on the mound.

“The Mets and JNT have definitely helped me a lot, when it comes to pitching and the mentality of playing the game,” Jones said. “Being on trips with the JNT has definitely put into perspective the lifestyle of playing pro baseball, and I love everything about it.

“Also, my other coaches like Scott Robinson and my trainer Carl Carter have really helped me over the off-season by putting on a lot more muscle, because I was known as the really skinny guy, and gaining weight has helped me increase velocity as well.”

In just his first season of working with Jones, coaching him with Toronto’s 18U squad, coach Chris Kemlo has seen a lot of progress from his young left-hander over just a relatively short time.

“He’s improved tremendously,” Kemlo said. “The biggest improvements he made were to his body. He really worked hard in the weight room and matured, just grew up and matured. He went from being a 6-foot-3, 170-[pound] guy to now being 6-foot-4, 195. For him to mature and get that kind of added strength, that was a big help for him.”

Not only did Jones improve physically, but the coaching staff with the Mets saw big changes in the pitcher’s competitiveness as he began to grow more comfortable with his surroundings.

“With him, there’s an improved compete level too,” Kemlo said. “When I first got to know him, he was shy and quiet, and he takes a while to warm up. Then once you get to know him you see the compete level and how intense he is. He’s still got a bit of that quirky lefty in him, but it’s all good and positive stuff. But he’s definitely grown up.”

Among the most excited for Jones are most definitely each of the members of his family, who shared in the moment on Saturday when he learned of Minnesota’s 28th-round selection.

“Overall it would be my mom and dad [Karen and Chris],” he said. “My mom was in Barrie with my sister’s softball team, so she couldn’t be here, but she was crying over the phone. And my dad was obviously extremely proud, and I have to thank him because he has helped me a lot since I was young.”

Awaiting physical testing and paperwork in order for the deal to be done, once Jones heads to Fort Myers, Florida, where the Twins house their young rookies, his coach is sure that they will be quickly pleased with their Canadian pick.

“He’s going to come in [to the Twins organization] and just work his tail off,” Kemlo said. “He’s a guy who gives you everything he has. He doesn’t take any days off. He’s always wanting to get better, always asking questions, wanting to learn about stuff. He wants to know about the nuances of pitching, how to attack guys, and that stuff is going to be the separator for him at the next level.”

Excited to follow Jones as he continues his progression down on the farm with Minnesota, Kemlo, the Mets, and the young lefty are all anxious for him to get going in order to see what he can do.

“He could be a 6-foot-4 lefty who sits in the low 90s with three average pitches at the big-league level,” Kemlo said. “So for him, there’s a lot of upside and a lot of potential. He’s got a long way to go, as anybody does, but the tools and the talent are there and he’s got the right mindset for pro ball right now.

Added Jones: “I am most excited for getting down there and continuing to work my butt off in order to accomplish my main goal, which is pitching on a major-league mound.”

Jones is one of six players from the Canadian Premier Baseball League selected in the draft this June, out of a total of 25 Canadians chosen. His Mets teammate Yerzy was taken in the second round, 52nd overall, by the Arizona Diamondbacks. Ontario Blue Jays hurler Jordan Balazovic followed in the fifth round, taken 153rd overall, also by the Twins.

OBJ catcher Luke Van Rycheghem was selected by the Diamondbacks in the 23rd round, and was followed by Great Lake Canadians right-hander Austin Shields, chosen in the 33rd round by the Pittsburgh Pirates organization and GLC outfielder Jake Wilson, taken by the Boston Red Sox in the 39th round.