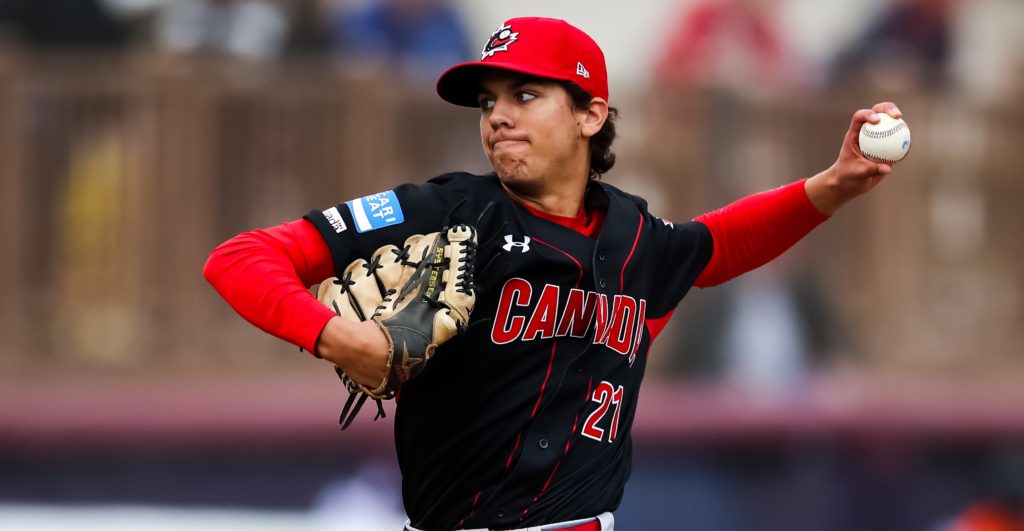 THUNDER BAY, Ontario – There’s nothing like being on the world stage.

Though Ontario Blue Jays southpaw Harley Gollert has been in the midst of excitement on the field before, playing for the Canadian Junior National Team on home soil at the World Baseball Softball Confederation’s U18 World Cup in Thunder Bay is something he’s never experienced the likes of.

“The excitement and energy levels are definitely on a whole other status,” Gollert said. “It’s not even comparable to anything else. And then obviously there’s all the little mix and different parts of the game, like the extra-inning rule, we got to see that Game 1 and that was pretty cool. It just adds to the pressure and intensity. Even the crowd is another factor. We’ve never played in front of this many people, so it’s made it a unique experience.”

Team Canada began its quest for gold at the World Cup with an extra-inning heartbreaker against Chinese Taipei, before losing its second matchup to Korea and landing in a hole that meant it needed to win three straight contests at Port Arthur Stadium to advance to the super round.

In a do-or-die matchup against Italy, the Canadians didn’t hold a lead until the ninth inning, completing an epic comeback before adding two dominant wins against Australia and Nicaragua to advance.

“The Italy game was actually a bit of a wake-up call for us,” Gollert said. “That’s the best way to put it. Those first two games, as good as they were, it was almost like it wasn’t an embarrassment to lose those. They’re definitely good clubs, and Italy, skill-wise, we should have been able to handle them a lot better. That’s when we realized we can’t just go out there and throw our best on the field and expect to win.

“That’s not really going to work, especially down here when everybody’s playing for their country with all this pride and they really want to succeed and do well and represent their country well. That was the biggest thing, and then with the momentum swing of getting that wake-up call and rolling with it, I don’t think we’re intimidated by anybody at this point, even the [undefeated] Americans. We’ve all played competition at just as good or better levels, so we can all play with [teams] like that and be successful.”

With Team Canada, Gollert has been called upon in some tough situations out of the bullpen, taking on Chinese Taipei in extra innings, where runners begin on first and second base; squaring off against Italy and trying to keep it close; and facing a bases-loaded, none out jam against Nicaragua. Typically a starter, those situations are relatively new to the 18-year-old lefty from Toronto, but he knows that each outing makes him stronger.

“It’s been different for me,” Gollert said. “I’m more just coming in with the idea that I want to win and however they want to use me, I’m just going to do whatever I can in that situation. It’s definitely a bit of a challenge, even the whole warmup idea, where I can’t control the length of my warmup and stuff like that. It’s definitely different.

“But putting myself in those situations will only make me better in the long run, and more versatile in the future. I’m happy I’ve been able to go through that, even though there have been wins and losses, and I’ve been successful and haven’t been so successful, but it helps me overall.”

Happy to have the confidence of his coaching staff, Gollert has so far proven them right in every situation he’s faced.

“It shows they have trust in me,” the Austin Peay commit said. “I’ve always been pretty good under pressure. I’ve shown that throughout my career, so being able to use that trust and confidence they have in me and letting my own confidence show on the mound, whatever situation I’m in, it helps. I’m making sure I do what I can do.

“If they beat me, they beat me, but I’m not going to let myself and the energy get to me. That’s probably the biggest thing. But I enjoy the trust, and I don’t get nervous when I come into situations like that, it’s just not the type of person I am.”

Not shying away from looking at times when he finds less success on the mound, Gollert believes that every outing is a learning opportunity and that occasional mistakes allow for more growth.

“I’ve been maturing, even when it comes to my non-successes, being able to deal with them and realizing that you’re not always going to be good or always on your game,” he said. “But being able to bounce back the following times has been a really big thing for me, especially in a tournament like this. It’s so up and down, and you saw it after Day 1, we looked like we were definitely in the gutter. But we’ve definitely bounced back here.”

With more to come, he’s enjoyed the experience so far.

“It’s definitely been good,” Gollert said. “Greg [Hamilton, Baseball Canada’s director of national teams] always talked about the excitement and the energy we were going to get in a world tournament like this, and you can talk about it for as long as you want, but until you get there and actually experience it, you can’t really understand it.

“We’ve actually been one of the teams in the tournament that has experienced the most of that momentum swing. It’s definitely awesome. We’re all growing together, and when we go through stuff like that together, it’s only going to make us better as a group. We’re able to bounce back from adversity better, which is going to be a key going forward, especially as we face better competition.”