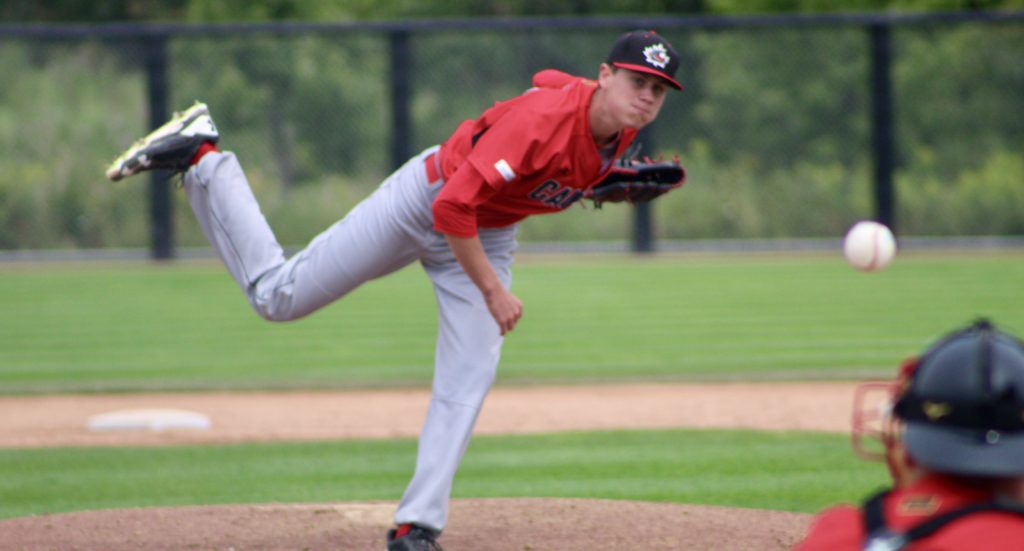 The 17-year-old right-hander from Newmarket, Ontario will take on Nicaragua in the team’s final matchup of the first round of play, and though Canada’s opponent is winless so far at the World Cup, Hassall and his teammates have learned not to underestimate anyone in the tournament after two early losses to Taiwan and Korea, and an epic ninth-inning comeback against Italy.

“I’ve got a mix of nerves and excitement,” the 6-foot-3, 170-pound righty said. “You can’t take anybody lightly, it doesn’t matter who it is or what their record is, it’s the country’s best, so anybody can beat anybody on any given day. You’ve got to prepare like you’re playing the best, because you are…

“Playing Italy for example, you don’t really think that they’ll be that difficult, but anybody can beat anybody and this is the best competition we’ve ever faced. It definitely has changed my outlook and I’m not going to take Nicaragua lightly.”

Heading into Wednesday with two straight victories against Italy and Australia, the mood has shifted in the Canadian clubhouse, and they couldn’t be more ready to get another game underway.

“After those first two losses, guys were upset, and they wanted to do better than that,” Hassall said. “But we had to respect both those teams. They were two really strong teams. But now coming and getting two wins back to back, our momentum is going strong now, everybody’s upbeat, we know we can pull this off, and everybody’s been staying positive, which is really good.”

Following the late-inning win against the Italian squad, the Canadian Junior National Team gave itself some breathing room against the Aussies, putting up six runs over the first two frames of the game and never looking back, and is hoping the trend continues.

“Going down 0-2 was a pretty rough start,” Hassall said. “But we’ve had two good bounce-back wins, the nice comeback against Italy, and then a much less stressful game against Australia, which was really nice to get an early lead and just hold it from there. It’s been great.”

A huge additional factor for the host nation’s squad has been the audience the team has seen in Thunder Bay for its games. They crowd has brought the excitement and enthusiasm for each of Canada’s wins, up and down with each out and run, with 12,262 fans through Port Arthur Stadium’s doors during the team’s first four games.

“Greg [Hamilton, Baseball Canada’s director of national teams] would always talk about the atmosphere, and it’s been crazy,” Hassall said. “It’s been an up-and-down tournament, but I didn’t expect how much the fans would be into it, how loud it can get, and really how quickly a game can turn around from one minute you’re down and all of a sudden you’re back in the game, or vice versa.”

Playing into extras and facing the international extra-inning tie break rule in its first matchup, and staving off relegation to the consolation round for the last two days, Canada has truly felt the experience of the game on the world stage, and Hassall is just hoping to keep it going as long as possible.

“International baseball is crazy,” he said. “Facing each country’s best is an unreal experience and this is probably going to be one of my best memories and accomplishments in baseball, so this is something really special.”

Coming out of the bullpen on Sunday against Korea, the Great Lake Canadians hurler is happy that he got his feet wet in the World Cup before heading into the most important game of his life, but Hassall understands that emotions might be a little bit higher on Wednesday. He believes he can temper them, and focus on what got him here to pull him through.

“It definitely got some of the nerves out,” the young hurler said. “But starting is going to be different against Nicaragua. Being out there and getting used to how it feels to have a crowd was great, because I’ve never pitched in something so big. That definitely helps, because it gives you a little experience to what it’s like, so that will help me…

“I’ve just got to pitch to what I’m capable of. I can’t try to do more than that. I’m not a big velocity guy, I’m more of a control-and-movement kind of guy, so I’ve just got to keep pitching to my strengths. And I definitely want to use the crowd and its support, but not get too jacked up on adrenaline and just lose it. You’ve got to stay calm, but also do what I’m capable of doing.”

Though the matchup looks lighter on paper than some of the heavyweight opponents Canada has faced so far, the team is coming off of its two wins with only one goal – another one. There are no other options for the squad in red and white as it looks to move forward on home soil.

“As I said to the guys after, I don’t want to dampen the celebration or be that guy, but it’s all for nought if we’re not ready for [Nicaragua],” Hamilton said. “And as [the game against Italy] showed, it doesn’t matter who you’re playing. It’s not always easy. They had nothing to lose. They’re playing with house money, and when you’re playing a team that’s pretty much got nothing to lose, if you give them a little life, it can be hard. So we’ve got to get out early, and try to do what we did [against Australia].”

Hassall has all the confidence in the world in the team behind him, and is going to do everything it takes to make sure that it tournament doesn’t end on Wednesday.

“This is amazing,” Hassall said. “I know that everyone on this team, one through nine and even the guys on the bench can hit. They’re showing off their power now, so I’m confident they can get us runs and even if I give up a few, they can get it back quickly, with our speed, power, contact. We’ve got everything on this team.

“And it’s such an honour to be able to represent your country and play for Canada and have all the fans behind you. Playing at home is really cool, and it’s surreal. The support has helped us a lot.”