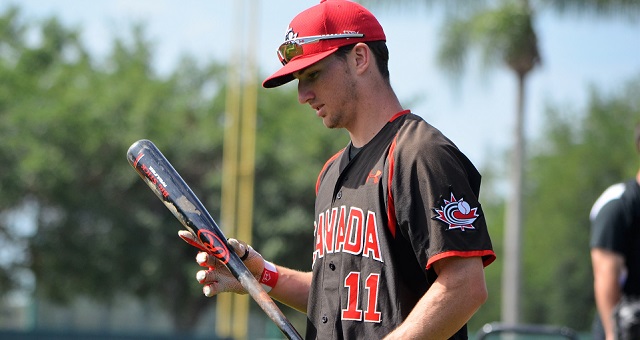 Hailing from the opposite of a baseball hotbed in Bermuda to becoming the 60th overall pick in Major League Baseball’s first-year player draft this year, selected in the second round by the the Baltimore Orioles, Adam Hall has proved himself to be an anomaly over and over in his young career.

Born and raised on the British island territory in the Atlantic ocean, Hall grew up playing soccer, cricket and volleyball, excelling in track and field, while honing his baseball skills in the country’s rookie league and benefiting from competing against older players, a opportunity given to him by the late Tom MacNeil, before earning funding from the Bermudan government to help him pursue his dream further.

On a summer trip with his parents Helen and Tyler to Ontario, the young infielder experienced his first chance at a Canadian baseball season before his teenage years. Hall was always an exceptional athlete, and his talent was recognized early. Not long after that first season, he moved full-time to London, Ont., essentially on his own at first, living with a host family and playing for the local Badgers team.

Fast forward several years since then, and two additional moves to bring his father and then his mother to southwestern Ontario, Hall graduated to the Great Lake Canadians program in its inaugural season, and as the program grew, so did the London resident’s presence on the Canadian baseball scene.

Hall joined the Canadian Junior National Team program at 15 years old and along with the guidance of national squad guru Greg Hamilton, has had a plethora of big-league coaches along the way, starting with Great Lake’s Adam Stern, Chris Robinson and Jamie Romak, and continuing with Team Canada instructors Pete Orr, Justin Morneau, and Hall of Fame second baseman Roberto Alomar, to name a few.

“If I had stayed in Bermuda, I wouldn’t even be playing baseball because they don’t have age groups for me,” Hall said earlier this year. “Maybe I would be doing track and field…Canadian baseball has changed my life a lot. Getting to work with Stern and [Robinson] and those guys at Centrefield Sports, they’ve been a huge part of my development. I would be here if it wasn’t for them.

“And the program that Greg runs is just phenomenal. When you talk to American scouts and they’re impressed and saying that it’s the best program out there, you know that’s really complimenting it. They’re going to want to say that the US has something better – the US is a baseball powerhouse – [and] they’re saying the Canadian junior program is the best program. What I’ve been able to develop through that and improve through that, it’s really been everything.”

Since joining Team Canada, Hall has been on countless trips to St. Petersburg and Orlando, Florida, along with the Dominican Republic, Cuba, Australia, and to the 2015 U18 Baseball World Cup in Osaka, Japan. The shortstop cherishes each tour as much as the entirety of the experience of representing Canada on the diamond.

“You remember the people you played with, the people you met, how close you were with them, and just how the family comes together that is Baseball Canada,” he said. “The experiences will last a lifetime and you’re a part of the family forever.”

Hall’s initial shot at the showcase circuit was at the Toronto Blue Jays-hosted Tournament 12, the first of many doors to open for the 6-foot, 170-pound shortstop. Beyond four appearances in four years at Tournament 12, the middle infielder also participated in multiple Perfect Game events, the East Coast Pro showcase, the Area Code Games, the Under Armour All-America Game, and Perfect Game’s All-American Classic at PETCO Park.

Though the 18-year-old never considered himself the prototypical type of player expected at the kinds of showcase events he participated in – not blowing everyone out of the water in any one category – his ability to remain consistently at the top of each of his tools was what separated him from the crowd.

“You think of the guys who go to those games and you think of big guys who are hitting the ball far and pitchers who are throwing 95 [miles per hour] plus,” Hall said. “I wouldn’t say I’m the typical guy to go to those but obviously I’m pretty happy that [I did]…

“I can bring a little bit of everything, whether that’s speed, defence, my arm, batting, power. When I bring all of that to a game, that’s what impresses people. It’s not just one thing in particular that I’m going to impress someone with.”

Hall has certainly impressed all those he’s been around throughout his years of development in Canadian baseball, and the Texas A & M commit has a bright future ahead of him, no matter what decision he makes.

Hall’s selection in the draft followed fellow Canadian Premier Baseball League member and Team Canada teammate Landon Leach, taken by the Minnesota Twins with the first pick of the second round, 37th overall, who was most impressed throughout his tenure with the national squad by the infielder.

“Adam Hall has really impressed me the most since we’ve been playing for the Junior National Team,” the 17-year-old right-hander said. “Especially with his work ethic and his hitting ability, and his defence as well. Overall, he’s been a good teammate and a good player to be around.”