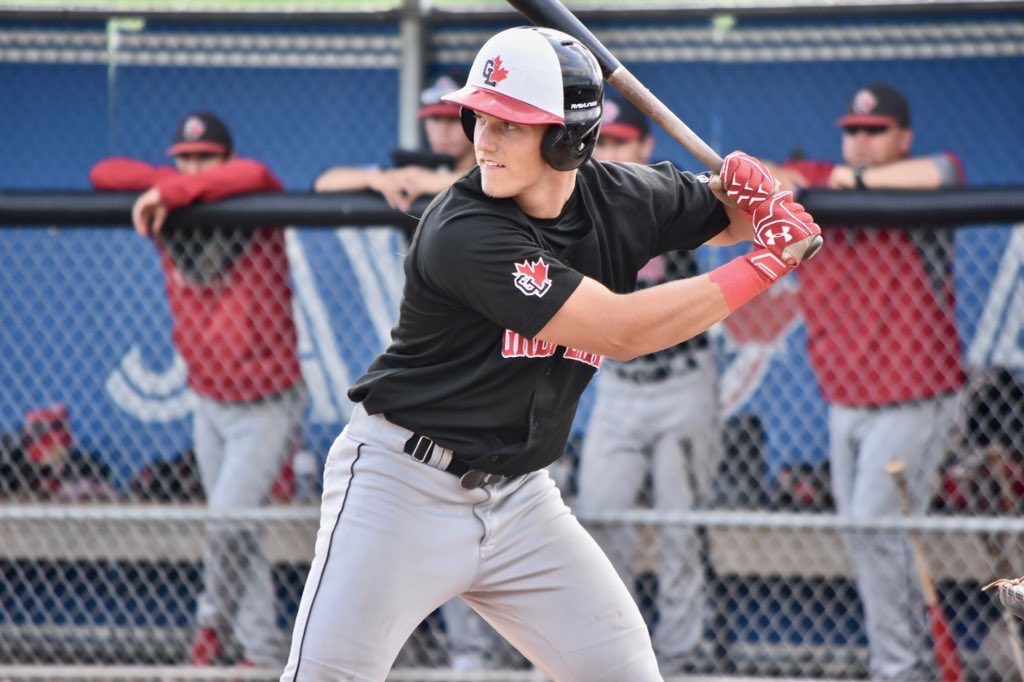 The 6-foot-3, 210-pound left-handed-hitting backstop from Niagara Falls became the third Canadian Premier Baseball League player taken off the board and the third Canadian selected by the Blue Jays when Toronto called his name in the 29th round on Wednesday, with the 867th overall pick.

Though Diodati discussed his options with the Blue Jays during the selection process, the 17-year-old plans to fulfill his commitment to the University of Alabama.

“I had some discussions with [the Blue Jays on Tuesday] where it got really serious and it was a really hard decision for me to go to school,” Diodati said. “They made a pretty significant offer financially and it was a hard decision, so I didn’t think it would end up how it did, that they would still choose me.

Extremely fortunate to be selected by the @BlueJays in this year’s draft. I cannot thank them enough for their support through this process. Truly a first class organization. With that being said, I will be honouring my commitment to attend the University of Alabama! #rolltide pic.twitter.com/Y6x4GvhZd2

“It says a lot about them as an organization and who they are as people. It was an exciting day for me, and it means a lot more coming from the Blue Jays especially because I don’t think there’s anyone I had a relationship with like the Blue Jays, and from top to bottom I knew everyone, and it was really special.”

Great Lake has seen firsthand how hard Diodati has worked to get to the point where he was able to have a decision to make between an impressive collegiate opportunity and professional baseball, and couldn’t be more proud of the young player.

“He’s been one of our hardest workers,” GLC director of baseball operations Chris Robinson said of Diodati. “He’s just the type of kid you don’t bet against. He’s a really mature kid on and off the field in terms of his approach to the game. Offensively, he’s got that professional approach already.

“I know there were some questions of whether he could catch, and I was impressed with how he went about that. He went and spent his entire off-season with a little bit of a chip on his shoulder to prove that he could catch, and it’s pretty cool today getting drafted as a catcher. That’s a cool thing for Owen because I know that’s something he believes in and he really wants to fulfill.”

Added Diodati: “The Blue Jays were one of the teams that really believed in me as a catcher and thought I could do well back there and stay behind the plate regardless of what the bat is and what usually happens to guys like me in pro baseball.

Big shoutout to GLC Catcher @owendiodati on being selected by the @BlueJays in the 29th round of the #MLBDraft pic.twitter.com/klOvXImkRP

“That was something I talked to [Robinson] about from the very start – I wanted to catch. For them to believe in me and to draft me as a catcher, it’s definitely special. It speaks to the hard work I put it, but also drives me and fuels me to keep working, because I know it’s possible if I really want to do it.”

As Diodati continues his baseball career beyond the CPBL and the Canadian Junior National Team, the Canadians are confident in what he will bring with him to the next level.

“He’s going to work,” Robinson said. “That’s something that [Diodati’s parents] Jodi and Ryan have instilled in him and something that we saw immediately when he came here. So that’s what it’s going to be again, whether with the Jays or down in Alabama, he’s going to keep working.

“He’s got such a great disposition to him and he’s a great teammate, he keeps things light, but he’s the type who leads by example when he’s in the weight room or when he’s on the field or whatever. We’ll see similar things from him as he moves forward.”

Diodati was one of just 25 Canadians selected in the 2019 draft, and one of six CPBL players chosen, joining Ontario Blue Jays Dasan Brown, TJ Schofield-Sam and Jaden Brown, taken in the third, 12th and 40th rounds, respectively, and Toronto Mets Ryan Leitch and Keegan Pulford-Thorpe, selected in the 29th and 33rd rounds.

“It’s something I dreamed of since I was a little kid, and coming from the Blue Jays it means even more because that’s who I grew up watching,” Diodati said. “It’s so classy for them to make that pick after not working out a deal. And three years from now, when my draft year comes around again, it makes that relationship that much stronger. Today was amazing, and getting picked was a childhood dream come true.”