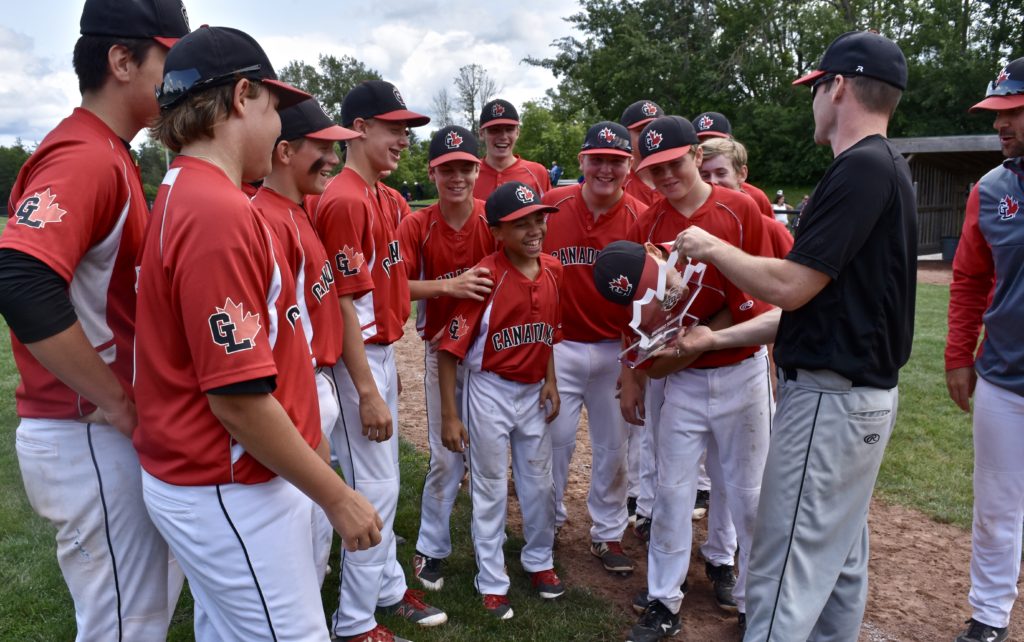 At the youngest level of the Canadian Premier Baseball League, the circuit champions from the second season held on in the third year for back-to-back titles, with the Great Lake Canadians Red squad taking down the Ontario Astros in the final for a second straight 14U season victory.

As the youngest team in the league, the GLC Red squad finished the third season of the CPBL atop the leaderboard with a 18-3 record and took its successes straight into the playoffs, recording four straight wins – against the Ontario Nationals, GLC Black, and then two against the Ontario Astros – to secure the title.

“The first game we started out kind of slow actually,” GLC 14U Red manager Brad McElroy said. “We scored four runs in four innings and then we added six in the fifth for a mercy, which saved our pitching. The next game we played Great Lake Black, which had just beat us in the [Grand Park] tournament for a big win…We had [Zach] Fishback doing what he did all year – he threw strikes, changed speeds and kept them scoreless – and we manufactured some runs.

“The next game we played Team Ontario and the last time we played them, we lost against them in the GLC [Canada Day Classic] tournament, so it was a redemption game for us. We blew it open right at the start and just kept it going. The story of that game was [Nolan] McCrossin, who had two errors in the first two innings and it was a tie game and it was a little bit of a nail biter, and then we had the bases loaded and he came up, and first pitch he hit a grand slam. From then on, it was our game. 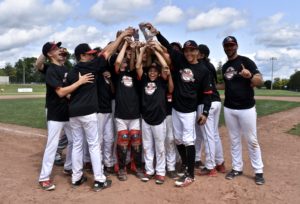 “In the final we got Team Ontario again and they were pretty depleted…Six or seven of our eight runs were all with two outs in that game, and we were able to win it. Pitching was great for us in the playoffs, the bats came alive, and we just clicked. It went well, and we limited the damage.”

From the beginning of the off-season to the final weekend of the CPBL, McElroy got to see the evolution of his young players, and couldn’t be more excited for their futures.

“I’m really proud of them,” the GLC 14U Red manager said. “It was a lot of hard work, and there were a lot of guys who stepped up and understood their roles, and went with it. Luke Beaton was our starting third baseman in the playoffs and he played good defence for us and put some balls in play to drive some runs in.

“[Nolan] Caudle stepped up and was our starting second baseman. He was making plays for us throughout the year and he earned that spot. And then in the middle of the order, those were the guys. You get to them and if anybody else is on base, we’re scoring them.

“So I was really happy with the team. We played well throughout the year, and they put it together in the playoffs and it worked. It’s a testament to the whole Great Lake coaching staff – the work everybody puts in, indoors, in practices, through the winter. You see the growth from these kids and they’re all green and coming from other organizations and they want to learn and really get the most out of it. You see the biggest improvements and it’s exciting.”

The excitement was shared by the members of the young squad, who were clearly elated when the final out of the last game of the CPBL season was made and they had a chance to hoist their trophy and celebrate a successful finish to a fantastic year.

“That’s why I love coaching this age,” McElroy said. “The kids are so coachable and have so much fun. They want to learn, they love baseball, and they play with smiles on their faces…At 14, they’re in the Great Lake program for the first year and they’re sponges. They want to soak everything up, and with our coaching staff having so many years of professional experience to pour into all these kids, it’s just outstanding. It’s pretty special.”