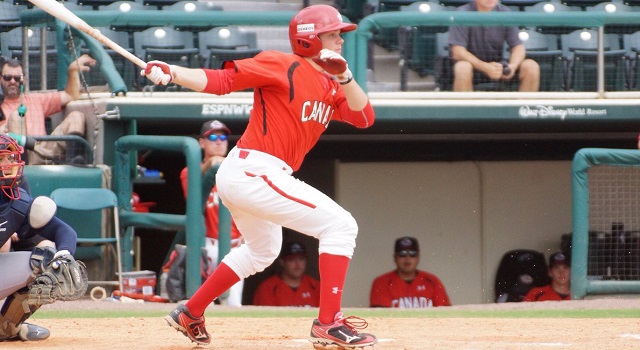 In the midst of the second Canadian Premier Baseball League season, the circuit found success on Major League Baseball’s first-year player draft board in yet another year.

In total, 20 players were chosen in the 2017 selection process from north of the border, including nine out of Canadian high schools, with four hailing from Ontario and every one of them representing a CPBL program.

Toronto Mets right-hander and native of Pickering, Landon Leach was the first Canuck off the board this year, the Texas commit selected with the first pick of the second round by the Minnesota Twins, 37th overall.

“The draft is exciting, but all spring I’ve been doing my best to go one trip at a time, not really thinking too much about the future,” Leach said. “I just wanted to do my best in every game that I pitched, and it’s definitely exciting.

“My whole family is excited about the future. It’s not a big family, but they’re all happy for me and they’re going to support me through anything…They’re happy for me and everything I’ve done already.”

Great Lake Canadians shortstop Adam Hall quickly followed Leach in the draft, when the Baltimore Orioles chose the Bermuda-born Londoner and Texas A&M commit with the 60th overall pick, also in the second round.

“I can bring a little bit of everything, whether that’s speed, defence, my arm, batting, power,” Hall said. “When I bring all of that to a game, that’s what impresses people. It’s not just one thing in particular that I’m going to impress someone with.”

Ontario Blue Jays outfielder and Mississauga’s own Cooper Davis was chosen by his hometown Toronto Blue Jays in the 25th round of this year’s draft. The 15th Canuck chosen during the selection process, taken 759th overall, Davis is committed to Vanderbilt University in Nashville, Tennessee. Dondrae Bremner, a Cincinnati commit from Toronto and shortstop in the Mets program, was selected by the Reds in the 31st round of the draft, 917th overall, as the 17th player from north of the border whose name was called.

The four CPBL players selected this year follows the inaugural season of the league, in which 12 Canadian high schoolers were chosen in the draft, with all six hailing from Ontario coming from the CPBL. Toronto Mets catcher Andrew Yerzy was the first one off the board in 2016, selected by the Diamondbacks in the second round, 52nd overall, and eventually signing for $1,214,100 before heading off to spend his season between the Arizona League and the Pioneer League.

“I’ve talked a lot with Andrew Yerzy, he’s one of my good buddies,” Leach said. “I worked out with him in the off-season as well, and I talked to him about how pro ball is and what it’s been like for him. He told me everything about it and what he liked about it. He said it’s obviously a grind, but he’s enjoying it at the same time, because he loves to play…

“He said it’s a big transition obviously because our trips are [to play pros] for two weeks, and you’re over there for eight months, so it’s definitely a big change in time, but honestly I feel like I’m ready. I know I’m ready for that.”

Ontario Blue Jays righty Jordan Balazovic was taken in the fifth round last year, 153rd overall, by Minnesota, eventually signing for $515,000 and spending his first professional season with the Gulf Coast League Twins, posting a 1.97 ERA over eight games and 32 innings before turning 18 years old.

OBJ catcher Luke Van Rycheghem was chosen by Arizona in the 23rd round and spent his first pro season in the AZL after signing for $100,000. Mets southpaw Matt Jones was taken by the Twins, and the 28th-round selection shared his rookie season with Balazovic in the GCL after he signed for $70,000.

Great Lake right-hander Austin Shields was selected by the Pirates organization in the 33rd round and got in just over six innings of work in the GCL after signing for $205,000 just before the deadline. His Canadians teammate and outfielder Jake Wilson was taken in the 39th round by the Red Sox, and opted to fulfill his commitment to Bowling Green State University.

Several graduates of current CPBL programs were also taken in the 40 rounds of the draft from Monday to Wednesday. Former Ontario Blue Jays right-hander Zach Pop was selected in the seventh round by the Los Angeles Dodgers. The University of Kentucky flamethrower and native of Brampton was the third Canadian chosen, 220th overall.

Pop was followed by Daniel Procopio of Niagara University on the second day of the draft, taken in the 10th round with the 295th pick by the Los Angeles Angels. The Toronto-born right-handed pitcher spent some of his high school playing days with the Toronto Mets program. Fellow Mets grad and Toronto native Eric Senior was chosen in the 13th round – 403rd overall – by the Washington Nationals out of Midland College. J.D. Osborne, another former Mets player and a catcher from Whitby, was chosen out of the University of Tampa in the 22nd round, as the 659th pick in the draft.

Other high school players hailing from the Great White North chosen through the 40 rounds of the draft include Clayton Keyes, an outfielder from Calgary, Alberta, taken by the Diamondbacks in the 15th round; Abbotsford, BC’s Cade Smith, a right-hander chosen by the Twins in the 16th round; Jason Willow, a Victoria, BC native and shortstop, taken in the 24th round by the Orioles; Quebec City second baseman Edouard Julien, taken by the Phillies in the 37th round; and the Tigers 40th-round selection, second baseman Rhys Cratty from Langley, BC. All nine Canuck high schoolers chosen are members of the Canadian Junior National Team.

Canadian college players chosen throughout this year’s process include Jonathan Lacroix, a right fielder from Seminole State and native of Montreal, Quebec, selected by the Astros in the 12th round; Prince George, BC’s Jared Young, a second baseman at Old Dominion taken in the 15th round by the Cubs; left fielder Raphael Gladu of Trois-Rivieres, Quebec and Louisiana Tech, taken by the Mets in the 16th round; Sherwood Park, Alberta’s Tanner Kirwer of Niagara University, the centre fielder taken by the Blue Jays in the 20th round; Louis Boyd from North Vancouver, an Arizona shortstop, selected by the Mariners in the 24th round; Northwestern Ohio righty Kyle Thomas, a Mississauga native, chosen by the Tigers in the 30th round; and Jake Lumley, a product of Canisius College from Windsor, the second baseman taken by the Athletics in the 33rd round.

In addition, two players who were born in Canada but grew up elsewhere were selected in the draft. Right-hander Christian Lindsay-Young from Hamburg, New York was chosen by the Reds in the 21st round out of Niagara County Community College; and righty Jordan Scheftz from Irvine, California was taken in the 23rd round by the Indians out of Central Florida.