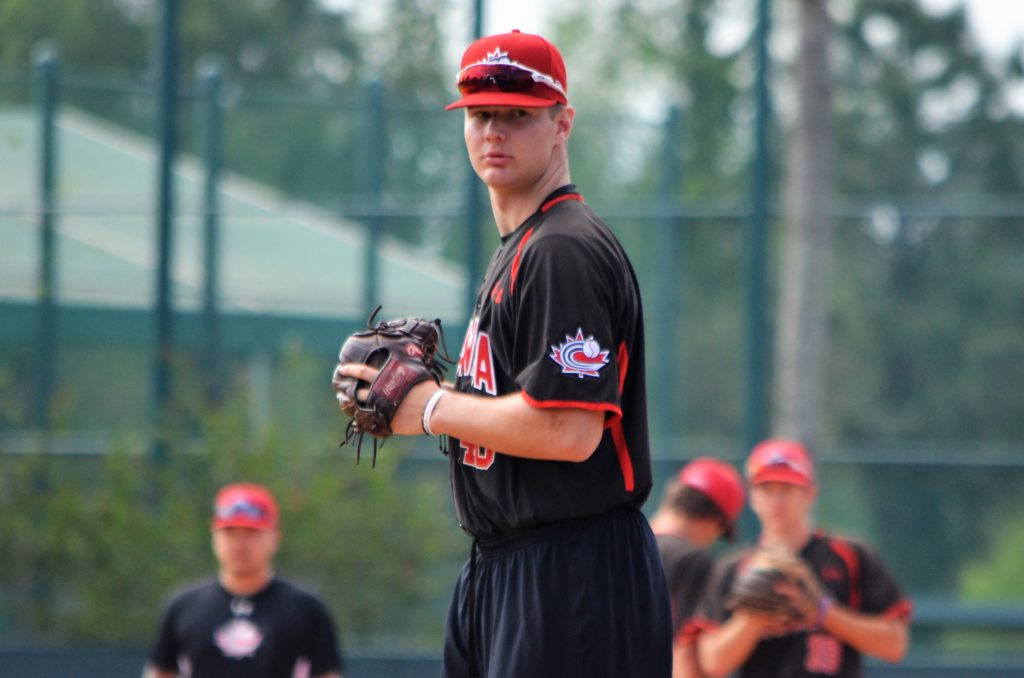 THUNDER BAY, Ontario – As the pressure rises and the excitement builds at the U18 Baseball World Cup, the Canadian Junior National Team will look to its most professionally experienced hurler to take the mound against one of its toughest opponents.

Matching up against South Korea to follow a tournament-opening loss for the Canadians against Chinese Taipei and a rained out, postponed contest against Nicaragua, 18-year-old right-hander Landon Leach will get the ball for the host squad, following his first taste of professional baseball after being selected by the Minnesota Twins in this year’s draft.

“This means everything,” Leach said. “Especially because the Twins let me come. So I was really happy that they did that. I’m really grateful for it, and this is the last time I get to be with all the boys. This tournament means a lot to us, so I feel like this is a really great opportunity. And it’s a World Cup – how many people can ever say they played in this? And hopefully we win it, but it definitely means a lot to me to be here.”

The native of Pickering, Ontario and graduate of the Toronto Mets program – where he began as a catcher and was converted to the mound just a couple of years ago – was the highest Canadian selected in this year’s draft, taken by Minnesota out of the Canadian Premier Baseball League with the first pick of the second round, chosen 37th overall.

After signing for $1.4 million, the young hurler joined the organization’s rookie-class Gulf Coast League team and went 2-0 with a 3.38 in five games and 13 1/3 innings with 10 strikeouts, using confidence he gained from having squared off against similar competition with the junior team over the last couple of seasons.

After watching his squad battle Chinese Taipei to open the world tournament at Port Arthur Stadium, and getting a glimpse of what the home crowd can add to the atmosphere when the Canucks give them something to cheer about, Leach believes he and his teammates can build from the extra-inning loss and find success as they move forward.

“I thought we played really well against Taipei,” the young pitcher said. “It was a good game from both sides, and just a couple of things determined the game, but it was definitely a good game. The crowd was in it obviously, and it was loud for us, being at home, and we were pumped to be there.

“But at the end of the day, it was a heartbreaking loss, because the game was so close, and there were a lot of ups and downs, but we can come back from this and definitely improve. And I’ll do anything for us to win against Korea.”

Playing with the core of Canada’s World Cup team on multiple trips over the last two years and growing close with his fellow countrymen, the squad’s flamethrower is looking forward to seeing the group play to its potential in Thunder Bay, and complete his career with the Canadian Junior National Team on a high note.

“It’s obviously really exciting to be here, definitely enjoying being at home, because the crowd’s always into it and they’re rooting for you instead of the opponent,” Leach said. “We definitely see the support. It’s obviously really important to win here because we’re trying to win a championship, but our team is really close, and we’ve been together for quite a while, and I feel like we’ll come together and just keep pushing and grinding through it.”

Heading into the game against the highest-seeded team in Canada’s pool – with Italy, Australia and Nicaragua rounding out the group with Canada, Chinese Taipei and Korea – Leach believes in his team to get back to basics and use their strengths to move forward and into the super round of play.