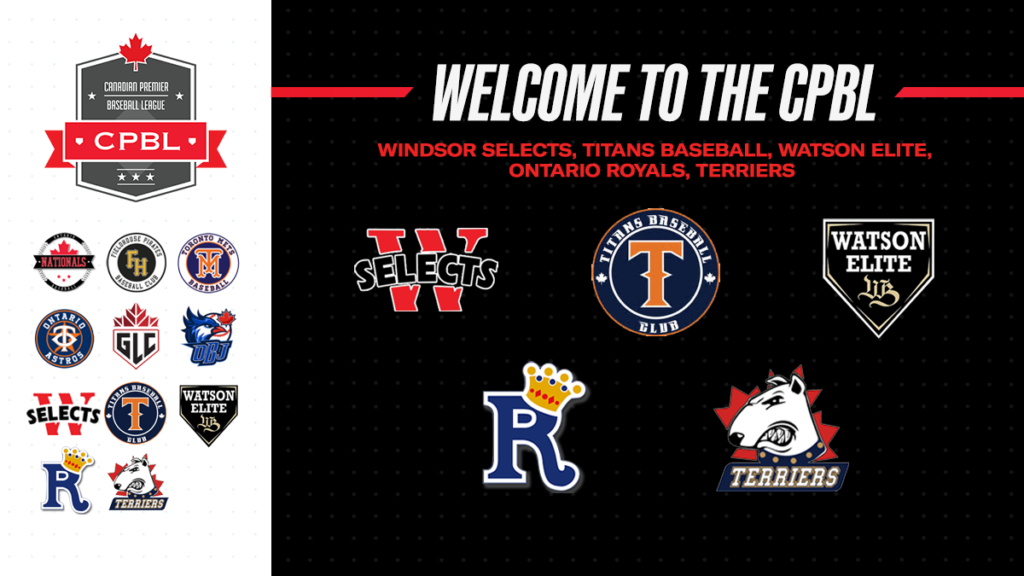 The competition in the country’s top league is ramping up.

As teams, organizations and players work within their local guidelines to get back on the field while continuing to battle the coronavirus pandemic, the Canadian Premier Baseball League is excited to announce that it is expanding. The expansion of the CPBL will see the circuit move from the inclusion of its six member programs to a combination of 11 of the top programs from around Ontario.

“Since the inception of the Canadian Premier Baseball League, the goal has been to foster the growth of amateur baseball in Ontario while providing a high level of competition among like-minded programs to help that growth,” said league executive Adam Stern. “Current CPBL franchises have provided a solid backbone for the league for the last five years and are looking forward to adding a strong group of new organizations to the best amateur baseball league in Canada.”

Joining the league are the Ontario Royals, Terriers Baseball, Titans Baseball, Watson Elite Baseball and Windsor Selects, all programs that are looking forward to getting out on the field and matching up against six original CPBL programs in the Fieldhouse Pirates, Great Lake Canadians, Ontario Astros, Ontario Blue Jays, Ontario Nationals and Toronto Mets.

“We applied to the CPBL because we believed York-Simcoe region baseball players were capable of competing against the best talent in Ontario,” said Lawrence Vera, the Titans’ director of player development and baseball operations. “Because of the elite level of play, the CPBL has built a prestigious reputation in its five-year history among recruiters, which will enhance the visibility of our student-athletes and put US college scholarships and MLB scouting attention within reach.”

The home of the Titans is in Aurora, with the Terriers based in Mississauga, the Royals in nearby Oakville, Watson Elite Baseball in Ottawa, and the selects, of course, in Windsor. “The entire Terriers organization is excited about being accepted into the CPBL,” said Dan Thompson. “We look forward to the outstanding competition that the CPBL will offer at all age levels and hope to contribute to keeping the CPBL the best league in the country.”

The original members of the circuit are just as excited about the expansion as the league’s newcomers, and are looking forward to the competition the additional teams will bring.

“The Windsor Selects are pleased to announce that they have joined the CPBL, recognized as being the top calibre 14U to 18U league in the province,” said Selects president Bernie Soulliere. “We have enjoyed a great relationship with the PBLO franchises and its executives since 1993, and it was felt that the time had come to expose our teams to an anticipated better level of competition. We look forward to the new challenges for the 2021 season and beyond.”

Added Matt Mills, owner and GM of the Royals: “We decided to apply for expansion when the opportunity was presented because we felt the CPBL would give our players the best opportunity to play the best competition, consistently. We feel that joining the CPBL puts our organization where it belongs — in the best 14U to 18U league in the country. The Royals are excited to move forward as a member of the CPBL.”

The five expansion programs will be welcomed into the fold officially in the spring of 2021, but the new organizations will be part of the exhibition schedule that will take place within the provincial guidelines in the fall. “We have a strong belief in the product within the league that the original franchises have developed, and by adding five more exciting and reputable franchises, we look to make the league that much more competitive,” league president Chris Robinson said.

“We’ve been encouraged by the success of our member programs, teams and players over the last five years, and we look forward to continuing to grow the game and the competition in the province and the country.”