The partnership between the CPBL and Perfect Game became official earlier this month, which included the news of a league All-Star team competing in the prestigious PG World Wood Bat Association Championship.

Today, the CPBL is pleased to announce the coaching staff for the inaugural All-Star Team that will take part in the event from October 6th-10th in Jupiter, Florida.

The event is a staple on the international scouting calendar each fall, and the CPBL takes great pride in putting together a coaching staff and roster of high calibre.

The team will be led by General Manager Jamie Romak, who spent 19-years in professional baseball before jumping into amateur baseball this past winter. 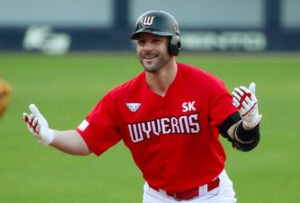 Romak’s wealth of experience will be a huge asset for CPBL players. The London, Ont. native, a 4th round pick by the Atlanta Braves in 2003, made his Major League Debut with the Los Angeles Dodgers in 2014.

After multiple stints in the MLB, Romak became a household name internationally, spending time in Japan before establishing himself as one of the greatest players in the history of the Korean Baseball Organization.

Rich Leitch, Jimmy Richardson and Corey Eckstein each will take on the role of coaches on the staff.

Leitch, who is the Vice President and Director of Baseball with the Toronto Mets and Secretary with the CPBL, has been a fixture in amateur baseball in Canada.

The Whitby, Ont. native attended and pitched at Lake Michigan College and Salem University before starting his coaching career following his playing days at Salem. He eventually rose to the head coach role at his alma mater before concluding his college coaching days as an assistant coach at Elkins College.

Jimmy Richardson serves as the Director of Baseball Operations with the Fieldhouse Pirates and is a member of the executive with the CPBL.

Richardson’s playing days were spent at Durham College as an infielder, where he was a part of two teams that competed in the National Championship. After his time at Durham, Richardson joined Fieldhouse as an assistant coach on the 18u club in their inaugural year.

The Mississauga, Ont. native, worked his way up within the organization and has been a mainstay, going on ten years in the system. Richardson has been at the reins overseeing the development of recent draft picks Owen Caissie and Nick Trogrlic-Iverson.

Corey Eckstein, the President and Director of Player Development with the Ontario Blue Jays, brings his wide scope of experience in baseball to the team.

The native of Abbotsford, BC., attended Vernon College before building the Abbotsford Cardinals from square one. He spent 14 years with the Cardinals before joining the Blue Jays.

Eckstein spent time as an assistant coach on the Canadian Junior National Team and as an Area Scout with the Kansas City Royals, amongst other positions in amateur baseball.

With an experienced and well-versed coaching staff in place, the expectation is to form a team that will compete immediately in the tournament.

Romak stated, “the CPBL and Perfect Game have a shared vision of bringing the best players from our league to the WWBA to compete in the highest level amateur tournament in the world. The opportunity to lead this group in year one is something I am both honored and excited by. It is our intention to bring together a group of players that will take a back seat to nobody in this tournament and shine a light on the level of baseball in the CPBL.”

Tryout dates and additional information will be released shortly.