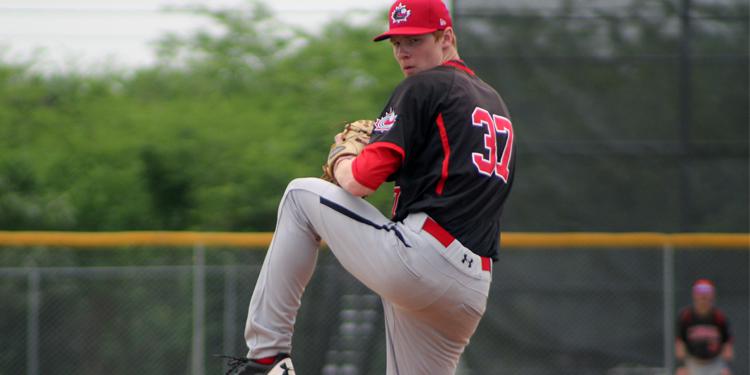 The Eric Cerantola on display at Rogers Centre during the fifth-annual Tournament 12 this year is an incredibly different one than the right-hander who put himself on the map at last September’s event.

From not knowing what the Blue-Jays hosted showcase was or what the prestigious tournament entailed, to taking the spotlight in the event just a year later, Cerantola knows that he has come a long way in a short time.

“Tournament 12 was a great experience and I really loved playing at Rogers Centre,” he said. “Honestly, I wasn’t quite familiar with what it was at the beginning of the year, but it was a really good experience, and good exposure at the same time. From last T12 to this one, I’ve matured a lot physically. My stuff has gotten better, I have cleaner mechanics, and it’s a lot better than it was last year.”

After joining the Great Lake Canadians program before last season began, the Oakville native’s appearance at Tournament 12 gave him a shot at the Canadian Junior National Team, with which he has become a mainstay. Between Team Canada and Great Lake, he has emerged as one of Canada’s top young arms, with more on the horizon.

“He’s grown a lot,” said Greg Hamilton, Baseball Canada’s director of national teams. “He’s got some gifts, obviously. You can’t take credit for teaching some of the things he brings to the table…He’s got size, he’s got an easy arm, he’s got great plane, and he spins the breaking ball.

“It’s just a matter of growing into that understanding and realization of the talent he has, and not getting too caught up in being in a hurry for all that to come together, and making changes rapidly…He’s got the makings of everything you’re looking for in a real, legitimate arm.”

Cerantola’s arrival on the Canadian baseball scene was fast and furious, making strong impressions everywhere he’s been. The 6-foot-5, 195-pound hurler is grateful for the coaching and experiences he’s had with the GLC program, after his previous team folded and left him without a diamond to call home.

“Joining the Great Lake Canadians was a really good decision for me,” Cerantola said. “Before, I was with the Ontario Diamondbacks, and they don’t exist anymore, so I was looking for a place to play. The GLC saw me at a tournament in Oakville…when I started looking for a team, I gave them a call, and they were interested, so I went there to join them.

“I’ve evolved a lot as a pitcher since I joined their program. My mechanics, velocity-wise, everything has gone up and the mechanics are much cleaner, and overall everything has improved quite a bit.”

Beyond crediting his parents Lucy and Franco Cerantola for allowing him every opportunity he’s been afforded, the young pitcher is thankful for the experience and wisdom that has been passed onto him from GLC pitching coordinator Adam Arnold, who’s enjoyed watching the teenager’s progress.

“We continue to work on keeping athleticism in the delivery, and having a plan and a purpose, starting right when he picks up the baseball,” Arnold said. “We had Eric start throwing from a hands-over-head delivery to create some rhythm and fluidity throwing the baseball. That gave him a chance to start separating over the rubber, be on time, and ultimately sync his body.

“He started to show some consistency with it, working more freely with a better tempo and the athleticism, natural strength, and ability followed along…As he has matured as a baseball player, his daily process, mentality, and plan when he picks up a ball have given him a chance to iron out some of the smaller day-to-day adjustments it will take to be successful in this game.”

As he continues to get better and grow, Cerantola believes that he has truly begun to learn how to pitch.

“My biggest asset is my pitchability,” the righty said. “With my stuff, my breaking balls and my off-speed stuff to go with my fastball, that’s what my best offering is. And I try to go out there and compete every single outing.”

Facing pros, and heading into the U18 Baseball World Cup in Thunder Bay with Team Canada just before Tournament 12, Cerantola has been helped over the last year by facing a higher calibre of competition than ever before, elevating his game.

“The junior team has been a great opportunity to get to face professional batters, and to get to learn really how to pitch against those kind of batters,” the Mississippi State commit said. “It’s completely different than being at home, playing against other high school players. You really have to bring out that third pitch and learn how to locate. If you don’t locate, the mistakes are bigger. But it’s been fun.”

When his team’s run in Thunder Bay comes to an end, Cerantola will return to the event that has been the highlight of his young career, looking to put everything he’s gained over the last year on display on his hometown stage.

“T12 last year was a really fun experience and the best thing I’ve done over the last couple of years so far,” Cerantola said. “I don’t think I’ve had anything quite like that, and our team made it that way. The team was a really fun group, and then add the fact that you’re playing in a major league stadium, there’s no better feeling than that.”