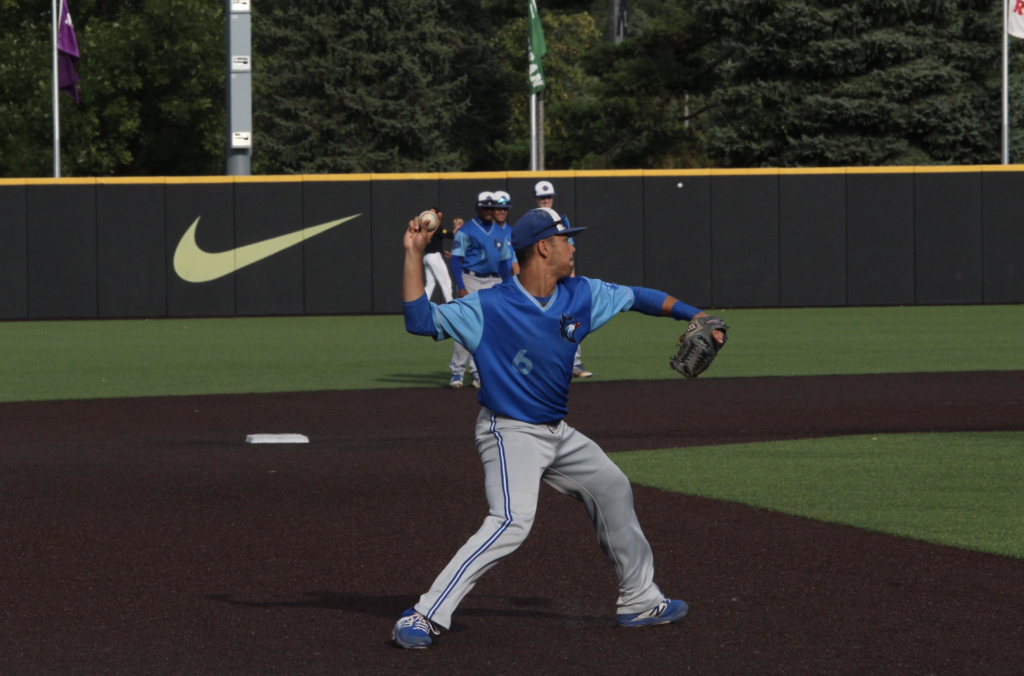 Tyrell Schofield-Sam was one of three members of the 2019 Ontario Blue Jays to hear their name called in that year’s draft, as the Oakland Athletics selected Schofield-Sam in the 12th round. The third-baseman out of Brampton, Ontario, thinks back fondly of his days in the CPBL and looks forward to his third year in the A’s organization.

The 2019 year was a memorable one for many reasons for Schofield-Sam; along with getting drafted and starting his professional career, he also helped lead the Blue Jays to the CPBL title, finishing off his tenure with OBJ on a high.

Along with himself, the club was anchored by fellow draftees Jaden Brown and Dasan Brown, a star-studded team that deservingly won it all. “We were a group of players who were ready to get to the next level and we all put a lot of hard work into winning with each other this one last time,” said Schofield-Sam.

#OBJAlumni, Tyrell Schofield-Sam (@TJSchofieldSam) & Dasan Brown (@dasani_brown3) have helped lead the Canadian offensive to a 2-0 record in South Korea at the 18U World Cup!

Playing for OBJ was integral in Schofield-Sam’s development, competing against CPBL talent and clubs in the U.S. “I feel that my time in the CPBL with OBJs went really well as they put me in a position to succeed,” said Schofield-Sam. “We spent a lot of time in the U.S. during the summer and I had many opportunities to showcase my game during the season.”

“There are many highlights of my time with OBJ but two that stood out for me were winning the Marucci World Series and the Future Stars Series (both were in Texas). Also, the fall trips with Coach Steed where we were able to play with the university and college teams were really good for my development. It gave us a chance to see what baseball was like at the next level and I had a lot of fun doing so with a really great group of guys.”

The greatest memory of them all was, of course, being selected by the Athletics on the last day of the June draft two years ago, a dream come true for the left-handed-hitting infielder. “It was surreal. It didn’t start exactly how I envisioned as I believed I would go higher but I believe that everything happens for a reason. I had a great support staff around me and hearing my name called – there was no greater feeling. All my life I’ve worked hard and getting drafted was one of my goals I set,” said Schofield-Sam.

“I knew that they were one of the teams, especially since my family and I have a great relationship with [scout] Matt Higginson. He has always watched me when he has had the chance and I was excited for the opportunity to play with the Athletics.”

Schofield-Sam enjoyed his first taste of professional baseball later that year, but like so many minor leaguers, he was unable to participate in games in 2020 due to COVID.

His workout regimes have taken place from the confines of his home while doing as much baseball activity as possible with available resources. “During COVID I have continued to focus on being prepared for when we go back to training. I am working out at home to continue with my strength training. I have been able to take some swings, ground balls and work on my throwing and running outside,” said Schofield-Sam.

“In the near future I am focussing on ‘growing my game’; expanding my knowledge and learning from what is said to me by my coaches, trainers and fellow experienced teammates. I believe constant growth is important and will help me in the future.”

“I hope that long term, my commitment to this game, my team, my coaches and myself will allow me to play in the majors.”