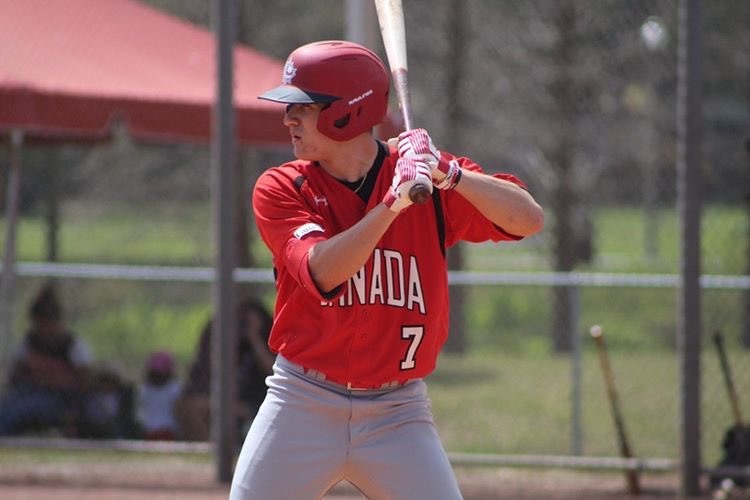 On June 11th of 2020, David Calabrese (Maple, ON) heard his name called by the Los Angeles Angels, as they selected him in the third round with the 82nd overall pick in the draft. It was a monumental moment for the left-handed-hitting outfielder, but just the start for what Calabrese hopes is a long career.

Calabrese, who had committed to Arkansas prior to singing professionally, jumped onto the scene in his junior year, setting the stage for his senior season in which he immediately established himself as one of the top prospects in the country.

Calabrese cracked the Canadian Junior National Team roster in March, partaking in the Spring Training trip before COVID forced a premature shutdown. Despite part of the trip being cancelled, it was a valuable and memorable experience for the young outfielder.

“The competition level in the CPBL prepared me for other opportunities such as T12 and playing for the Junior National Team, which was definitely a dream come true,” he said.

Meanwhile, for his league team, the Ontario Blue Jays, Calabrese frequently crossed the border, benefiting from experience against collegiate players. “Playing on the OBJ Collegiate Fall Trip team was a great experience. Being able to play against top college and university programs in the U.S was definitely something that helped us prepare for the next level.”

“Playing at different schools everyday and learning from our coaches and their experiences with playing at the next level was a big help in getting me to where I am today.”

His experience with both the Blue Jays and the National Team helped lead him to what he calls “one the biggest moments of my life,” getting picked by the Angels. “It was definitely a special experience. The time leading up to the draft was quite hectic but very exciting at the same time.”

With the 82nd overall pick, the #Angels select OF David Calabrese! pic.twitter.com/5Z5J5yi7N3

Due to the cancellation of the minor league season, the start of Calabrese’s career was different than he could have imagined; however, Calabrese kept busy from his home while waiting for the call to head West. “After signing with the Angels, I continued my daily workouts and ensured that I was ready to go for whenever an announcement came to get down to Arizona and get started with the club,” he said.

“Fortunately, I was selected to the Angels Instructional Camp Roster in October. It was my first taste of professional baseball, and I really enjoyed the opportunity to learn and get better on a daily basis. Being able to learn from guys who have had lots of experience at the minor league level and coaches who excel in developing talent was a very big help in adjusting to the professional lifestyle.”

As things currently stand, Calabrese is back training from home, preparing for Spring Training In Tempe, Arizona. “With the facilities being closed again, I’ve had to adapt to working out from home. The Angels coaching staff has been great communicating with me as I continue my offseason program,” he said.

Calabrese’s focus is on “getting better in every aspect” as well as “getting stronger,” as he awaits the start of his first full season in professional baseball.

“My plan moving forward is to be ready for spring training and getting back to playing baseball every day.”