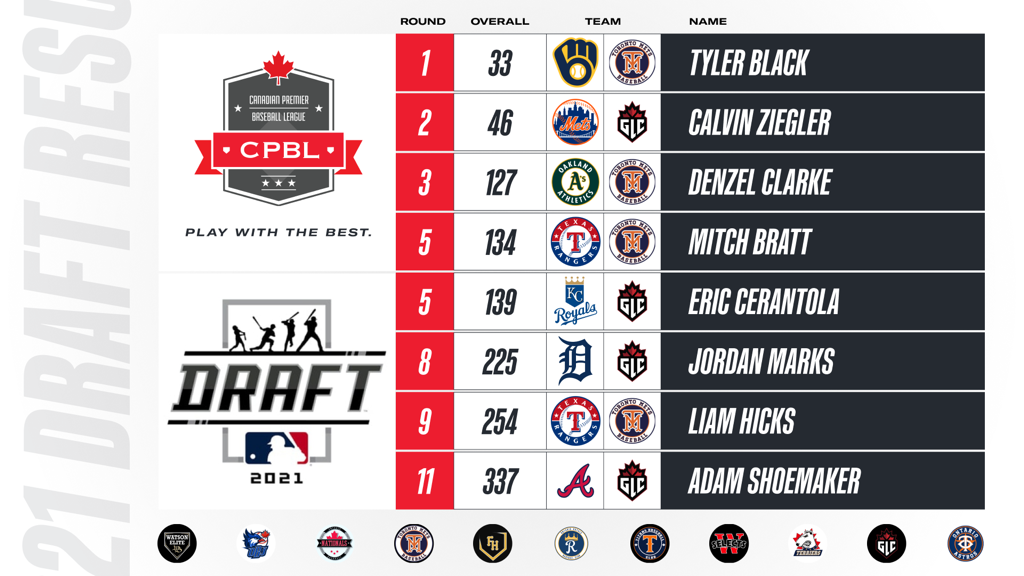 The 2021 MLB Draft came to a close yesterday after 20-rounds of excitement. It was a memorable draft for many within the CPBL as eight of the nine Ontario natives drafted played in this league as amateurs.

The drafted present and former CPBL players include four members of the Great Lake Canadians and four of the Toronto Mets.

Tyler Black, who spent his amateur days with the Toronto Mets, was the first Canadian off the board, going to the Milwaukee Brewers in the Competitive Balance portion of the first round. The Toronto, Ont. native put up historic numbers during his time in college at Wright State University and helped the Raiders to the regionals this year. Black was a Division I Third Team All American.

With the 33rd selection of the 2021 #MLBDraft, the Brewers select 2B Tyler Black from @wrightstate. pic.twitter.com/CAwZjsibzr

The first amateur player from Canada taken in this year’s draft was Calvin Ziegler, a member of the Great Lake Canadians. All Ziegler did in his time in the CPBL is dominant, putting his mid-90’s fastball and quality three-pitch mix on display. The right-hander was a participant in the CPBL All-Star Showcase last fall and had committed to Auburn University.

🚨 GLC RHP @CalvinZiegler19 has been selected 46th overall by the @Mets in the 2nd round of the #MLBDraft. 🍁 This makes Ziegler the highest overall pick in GLC history! pic.twitter.com/tDq9JeSzjK

Clarke, an outfielder from California State University, Northridge and a Toronto Mets alumni, was taken by the Oakland Athletics in the fourth round. Stories of Clarke’s defensive prowess continue to this day as the outfielder was a highlight-reel during his time in the CPBL. Clarke was a New York Mets draftee out of high school before going to school, where he was a force for CSUN.

With the 127th pick, the @Athletics select @csunorthridge OF Denzel Clarke, No. 98 on the Top 250 Draft Prospects list.

Bratt, a left-hander for the Toronto Mets, heard his name called in the fifth round by the Texas Rangers on Monday. The Newmarket, Ont. native jumped onto the scene early and has continued to get better every year since. Bratt is the first graduate of Newmarket HS to get selected since Keegan Pulford-Thorpe, the first being Pete Orr. The left-handed pitcher was an attendee of the CPBL All-Star Showcase in September.

With the 134th pick in the 2021 MLB draft… pic.twitter.com/rudjBWTrnW

The Kansas City Royals took former Great Lake Canadians right-hander Eric Cerantola with their fifth-round selection. The Oakville, Ont native was a prospect out of HS but turned down the Tampa Bay Rays to head to Mississippi State. Cerantola recently attended the MLB Draft Combine, where he showcased his elite stuff.

With the 139th pick, the @Royals select @HailStateBB right-hander Eric Cerantola, No. 247 on the Top 250 Draft Prospects list.

Marks, a graduate of USC-Upstate and amateur player for the Great Lake Canadians, went to the Detroit Tigers in the eighth round. Marks put up legendary numbers during his time in college, finishing as the all-time school leader in a number of major statistical categories. He pitched to a 2.54 earned-run-average this season with 9.5 strikeouts and 1.9 walks per nine innings. He was the Big South Pitcher of the Year.

Hicks, a product of the Toronto Mets, heads to the Texas Rangers after a great college career. Hicks did nothing but hit during his two years at Mineral Area College, batting .440. He did more of the same at Arkansas State, finishing his junior campaign with a .340 batting average and seven home runs.

Congratulations to Toronto Mets Alumni @liamhicks28 on being selected 254 overall by the Texas Rangers in the 2021 @MLB draft! We are so happy for you. pic.twitter.com/zcnANq4g0n

6-foot-6 left-hander Adam Shoemaker was selected by the Atlanta Braves in the 11th round on Tuesday. The Cambridge, Ont. native blossomed during his time with the Great Lake Canadians and now is the third Canadian high school pitcher selected in the draft. The left-hander’s 2020 season concluded with three elite innings at the CPBL All-Star Showcase, in which he struck out five.

The @Braves have selected current @GLCanadians LHP @Adamshoemaker_ 337th overall in the 11th round of the #MLBDraft. pic.twitter.com/dP6Oqqw8si